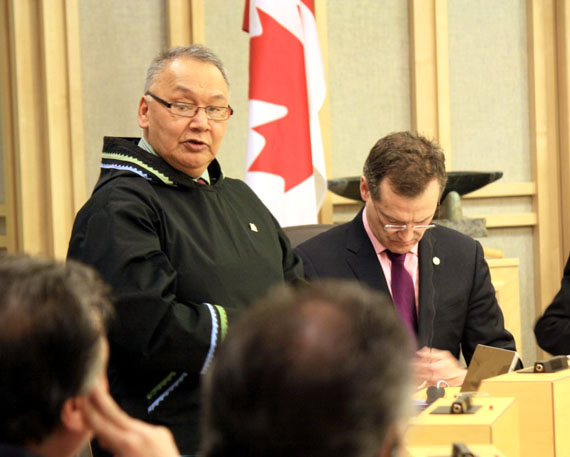 Johnny Mike, minister responsible for the Qulliq Energy Corp., pictured here with Finance Minister Keith Peterson in 2015, says the Government of Nunavut is still seeking alternatives to diesel-power generation in the territory. That includes hydroelectric power, even though the government halted plans for the Iqaluit hydro project in 2014. (PHOTO BY PETER VARGA)

Nunavut’s minister responsible for the Qulliq Energy Corp., said this week that although the QEC’s Iqaluit hydroelectric project has been “on hold” since 2014, it remains part of an ongoing effort to find alternatives to the diesel-powered generation of electricity.

The government and the energy corporation are “looking for alternative forms of energy and the hydroelectric project is part of that,” QEC Minister Johnny Mike said in the Legislative Assembly, March 6.

“That’s where it stands right now.”

In November 2016 the government wrote off $10 million racked up earlier on planning work for a hydro-electric dam near Iqaluit to generate power for the city, chalking up the amount as an expense instead of an investment.

In the final session of the legislative assembly last year, Nov. 8, Finance Minister Keith Peterson said the project was not dead, but “on hold” in the sense that “some of the work” the $10 million paid for over the period between 2005 and 2014, “may be useable in the future towards that project.”

The GN spent the $10 million up to 2013 on environmental studies, according to Mike.

At the same November session, Mike said the QEC had expected costs to assess the environment around the site would escalate by another $6 million at least.

“So, in adding the funds, it would have required over $16 million if it was to be continued,” Mike said. “But it was not approved.”

The minister said the QEC. estimated the Iqaluit hydro project “would cost well over $300 million, even approaching $500 million.”

“QEC would have to recoup this cost through the existing electrical rates charged to their clients, and based on the current rates,” Mike said.

Without saying how big an increase in rates would be needed, Mike simply stated the energy corporation, “would not be able to pay for this project even if it was approved.”

Mike and Peterson each said the project could not take place without large sources of funding.

Peterson reminded MLAs that the project was part of a broader plan to take the territory off of diesel power-generation and shift to renewable energy sources such as solar power, wind, and tidal power.

MLA for Iqaluit-Niaqunnguu, Pat Angnakak, brought the matter up again this week in the assembly, some four months after the government’s write-off of the $10 million.

She noted that the Nunavut Impact Review Board had asked the energy corporation on Jan. 23 this year “to provide an update” on the, “anticipated date of submission of the draft environmental impact statement for the Iqaluit hydroelectric project.”

“In its reply to the NIRB, QEC [Qulliq Energy Corporation] indicated that, and I quote, ‘the Iqaluit project continues to be on hold until further review,’” Angnakak said.

“Is the Iqaluit hydroelectric project alive, is it dead, or is it on life-support?” she asked Mike.

Mike’s reply echoed statements Peterson made last November, with a suggestion that renewable energy projects such as tidal, wind or solar-generated power could be cheaper alternatives to hydro power.

Short on specifics, Mike cited renewable energy-generation methods “that don’t impact the environment” such as solar, wind, or even hydroelectric energy.

The Iqaluit hydro project’s cost estimates have ballooned up to as much as $500 million from $255 million in 2014, he said, which the territorial government cannot pay on its own.

Mike agreed, and pointed out that the federal government “spent $2.6 billion” to support “international organizations in the fight against climate change.”

The federal government pledged such an amount in November 2015 to help developing countries fight climate change.

“This was a huge amount” to contribute outside of Canada, Mike said, particularly in view of the fact that Canada’s northern communities are lacking in infrastructure.