Nunavut’s latest government: what does it stand for?

On numerous issues that affect the day-to-day lives of residents, Nunavut’s premier and cabinet have nothing to say 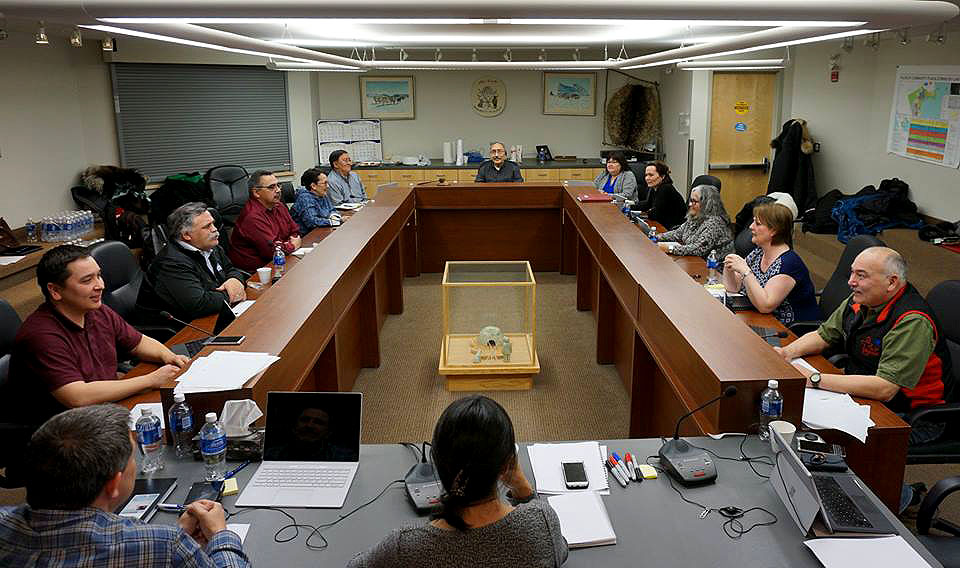 The Nunavut cabinet meets in Igloolik this past January, prior to a full caucus meeting of all MLAs held in February. (GN HANDOUT PHOTO)

The current Nunavut government has held office since Nov. 21, 2017, when the 22 members elected to the Nunavut legislature this past Oct. 30 chose a premier and cabinet.

That was nearly six months ago. And yet this government still can’t declare what it stands for and what it plans to do.

They had a chance to say that in March, when they released their Turaaqtavut mandate document.

But they didn’t. Instead, they produced a content-free compendium of classic Nunavut clichés.

“We will work towards the well-being and self-reliance of our people and our communities!”

“We will provide education and training that prepares children, youth, and adult learners for positive contributions to society!”

“Investing with partners in infrastructure!”

“Strengthening the foundations for a fully functional, bilingual society!”

They had another chance to do that within the commissioner’s address, the territorial equivalent of a speech from the throne.

As far as it goes, it’s all unobjectionable. Who could possibly be opposed to “education and training” or “well-being and self-reliance” or “a fully functional, bilingual society?”

The point, however, is how to get there. And on that front, the Nunavut “government,” by which we mean the premier and cabinet, has, with a couple of minor exceptions, yet to act like a government. They have offered no specific ideas, proposals or commitments to advance the vague priorities they claim to believe in.

And on numerous real issues that affect the day-to-day lives of real people, they still have nothing to say.

For example, the Qulliq Energy Corp. has proposed sweeping changes to the way it charges every customer in every community for electricity: a 7.6 per cent rate increase combined with a multi-year movement toward uniform rates in every community.

There are valid arguments for and against this proposal.

But if it’s adopted, the QEC proposal would almost certainly increase the price of food and other goods and services for many thousands of people. The electricity that powers all those freezers, refrigerators and grills you see in your local stores and hotels and coffee shops will cost more. That means that in many communities, it’s people like you who will pay more for store-bought food and other products.

Has the territorial government taken a position on this issue? Apparently not. There’s little evidence the premier and cabinet even grasp its implications.

“Again, I cannot really answer that particular question,” Nunavut Premier Paul Quassa said last March when an MLA asked him about it.

At the same time, the commissioner’s address and the Turaaqtavut mandate failed to provide any specific, meaningful statements on energy policy.

Another example is cannabis regulation and the territory’s response to the Liberal government’s Bill C-35, which would legalize the sale and possession of small amounts of cannabis.

Again, this is a real issue that affects the day-to-day lives of thousands of people.

Reliable current numbers are hard to come by, but based on old surveys that do exist, cannabis use among Nunavummiut likely ranges from between about 30 per cent to about 70 per cent, depending on the community and the age group. This has led to a huge underground economy conducted in secret.

At the same time, credible research has shown cannabis dependency is a risk factor for death by suicide. The Canadian Medical Association, citing multiple credible studies, has warned governments about the neurotoxic effects of cannabis on the developing brains of adolescents and young adults.

Where is the Nunavut government on this issue? Right now, they lag far behind every other province and territory in Canada. And the commissioner’s address and Turaaqtavut mandate statement—where specific policy statements are supposed to appear—have nothing to say on cannabis legalization.

You may agree or disagree with Patterson’s stated position on cannabis. But he at least did the work, took a position, and communicated it to the public. That’s what political representatives get paid for.

And there’s climate change, where this week we learned the current territorial government has developed no greenhouse gas reduction target. They can’t even state when they’ll develop one. Again, this means Nunavut lags far behind every other province and territory. The Government of the Northwest Territories, for example, developed a GHG emission target years ago.

The previous Nunavut government, under ex-Premier Peter Taptuna, said they feared the impact of the federal government’s looming carbon tax on the territorial economy. But the current government has no stated position on the issue and has not calculated what a carbon tax would cost.

The concern about a carbon tax is legitimate. But without coherent positions on climate change, the Nunavut government has little credibility on the issue.

But then, they’ve established little credibility on any of the issues that matter. Take the Education Act, whose bilingual education goals have been in non-compliance with reality for its entire existence.

Well, aside from the usual jibber-jabber about “quality schooling” and “improved student outcomes,” the government says they will amend the Education Act and the Inuit Language Protection Act.

But MLAs did not need to hold a week-long mandate retreat in Pond Inlet to figure that out. Reviews of those laws are already mandated—by existing legislation. Again, the premier and cabinet have communicated no specific positions and offered no concrete ideas on how they’ll deal with education and language.

Okay, they did offer one quasi-specific statement. Last month, they dumped one of their “partners in infrastructure.”

That’s the Kitikmeot Inuit Association, who must now pursue their Grays Bay road and port dream on their own, and earlier this week, asked the Nunavut Impact Review Board to immediately suspend its environmental review of Grays Bay until they can figure out how to advance the project on their own. On that point, the territorial cabinet did make a statement about something, even if it’s something they don’t want to do anymore.

Apart from that, they’ve yet to demonstrate that they’re capable of governing. JB