Nunavut’s most notorious dump fire could be put out soon 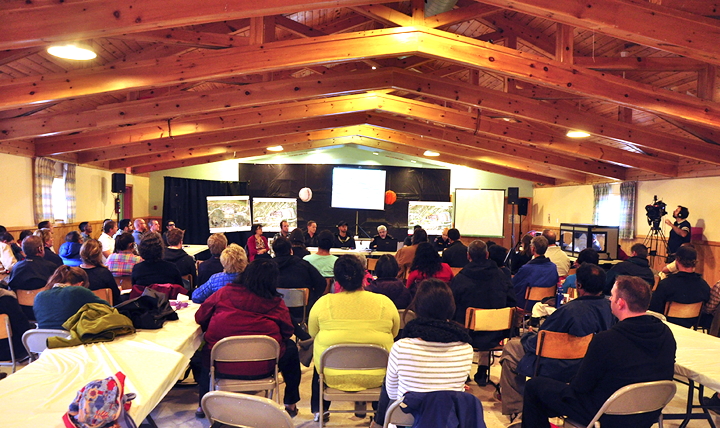 About 50 residents of Iqaluit showed up to an Aug. 25 public meeting at St. Jude’s parish hall to hear the city’s plan to extinguish their dump fire once and for all. (PHOTO BY THOMAS ROHNER)

After 97 days of griping, foul wind, national media attention, air quality monitoring, fear of toxic contamination and continuous health advisories, residents of Nunavut’s capital city can now start counting down the days to when their notorious dump fire is likely to be extinguished.

Efforts should get under way early Aug. 27, Iqaluit Fire Chief Luc Grandmaison told a public gathering at St. Jude’s parish hall in Iqaluit on the evening of Aug. 25.

“You can expect lots of white smoke, basically smoke that is humid,” Grandmaison told the 50 or so people who showed up to voice concerns and also gratitude that “dumpcano” would soon be dead.

White smoke is not a health hazard, Grandmaison added, although there will be periods of black and grey smoke, which carry potentially toxic particulates.

“Our goal is to bring that particulate down as close to the landfill as possible,” he said.

Representatives from the territorial department of health, Health Canada, and Environment Canada were on hand at the public meeting, as well as from the City of Iqaluit and two private companies the city has enlisted to help with the effort — Hellfire Suppression Services Ltd. and Tower Arctic Ltd.

Grandmaison gave an hour-long presentation with pictures and maps, filling in a few more details of the plan to extinguish the fire and identifying what the community can expect in the weeks to come.

To contain the spread of particulate matter, the city has hired six professional firefighters from Hellfire Suppression Services and will use 90,000 pounds of their heavy equipment, Grandmaison said.

Ryan Stambaugh, president of Hellfire, said specialized water monitors will spray water into the smoke to bring particulates down as quickly as possible.

“With the black and grey smoke, our job is going to be try to knock that down before it even leaves the landfill site,” he said.

A number of residents voiced concerns about the wind hampering work and bringing smoke into their neighbourhoods.

Stambaugh said Hellfire would work with the wind as much as possible, working faster on days when the winds are “favourable,” which means, not blowing over Iqaluit.

He also said that levels of particulates, on average, shouldn’t increase during their efforts, though there may be periods where that particulate dust “spikes.”

Health Canada has been monitoring the air quality of Iqaluit since early June. A number of citizens were concerned that only one monitor — outside the bylaw office in Tundra Valley — measured for dioxins and furans, compounds already identified in the dump fire’s smoke and linked to cancer.

Maureen Baikie, the chief medical officer for the Government of Nunavut, said that data from that monitor is posted on the health department’s website, but it can take up to a “few weeks” to post new results.

But Baikie stressed that the health advisory for Iqalummiut will remain the same: those more vulnerable, such as the elders, children, pregnant women and those who have health or lung conditions, should remain indoors, with windows closed, if the wind brings smoke into their neighbourhood.

There will be a safety zone with 24-hour security during firefighting efforts to protect citizens from smoke, Grandmaison said, as well as to protect the heavy equipment supplied by Hellfire and Tower Arctic.

Only dump trucks and equipment related to fighting the fire will be allowed within 1.2 km of the landfill during this time, Grandmaison said.

One resident asked if the increase in smoke will impact the berry-picking season currently under way.

After consulting with Health Canada officials, Baikie said the smoke would not penetrate the berries and that picked fruits, even without the dump fire, should always be washed before they are eaten.

Another resident said that she’s relieved that soon she will no longer have to worry about sending her kids outside to play. She thanked the fire chief and city council for addressing the fire.

“We should not just complain,” she said.

Grandmaison said efforts to separate cardboard and wood from household garbage will minimize the chance of such a fire occurring again.

“There is a lesson learned here for all of us,” he said. “I certainly hope we all can do better. We all have to think of our trash and separate it.”