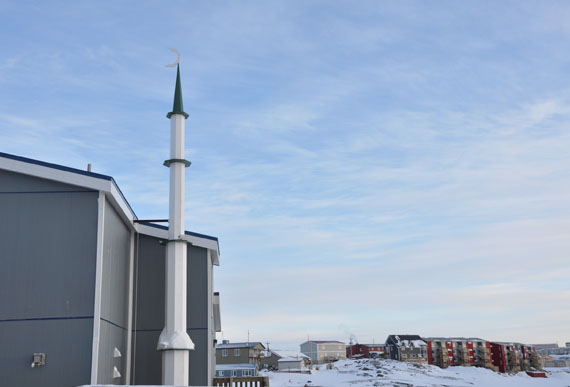 The minaret outside the mosque symbolizes the speaker used to call Muslims to prayer outside of mosques elsewhere in the world. Iqaluit’s new mosque is located in the community’s Road to Nowhere neighbourhood. (PHOTO BY SARAH ROGERS) 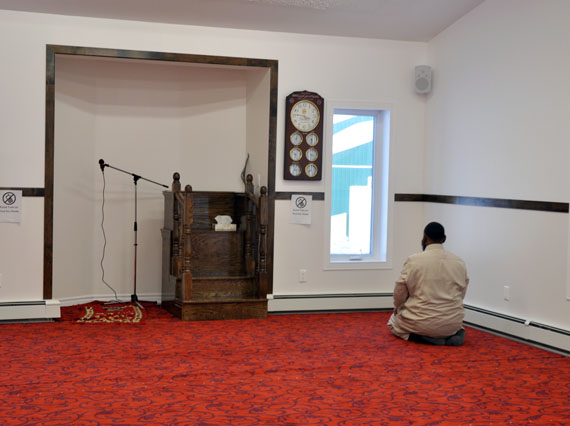 An Iqaluit Muslim prays March 1 in the men’s prayer room at the community’s new mosque. (PHOTO BY SARAH ROGERS) 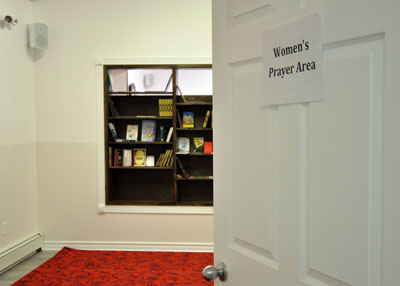 A peek into the mosque’s women’s smaller prayer room. “Generally speaking, more men use the mosque,” said Mohamed Hassan of the Islamic Society of Nunavut. (PHOTO BY SARAH ROGERS)

As a practicing Muslim in a community with a brand-new mosque, Mohamed Hassan has an ideal day job.

The cable technician and Xerox repairman is constantly on the road, stopping in to see clients around Iqaluit.

That gives Hassan a chance to regularly stop in and pray at the new mosque that just opened its doors last month in Iqaluit’s Road to Nowhere neighbourhood.

“I would do prayers wherever I could before, but now I take five minute breaks to come here,” Hassan said at the men’s entrance to the small blue building.

“It’s like no other place. It’s the house of God.”

With the help of the Winnipeg-based Zubaidah Tallab Foundation, the Islamic Society of Nunavut built and opened its new place of worship in mid-February.

The building now serves as a place of prayer, but also as a community centre for Iqaluit’s 100 or so Muslims.

The thin tower attached to the building and topped with a crescent moon, called a minaret, is a visual symbol of the loud speaker outside many other mosques worldwide, designed to call Muslims to prayer.

Inside the mosque on a March afternoon, a man’s voice fills the corridors as he chants that call from the men’s prayer room.

The mosque has yet to be named, and its small population doesn’t yet support an imam to lead worship — so a few local brothers lead prayer instead.

The smaller prayer room reserved for women is empty. Hassan explained that more men tend to use the mosque because they traditionally work outside of the home, while women stay home to care for the family.

In the Islamic faith, prayer is linked to the rotation of the sun, so Muslims pray at sunrise, at noon, mid-afternoon, after sunset and when darkness sets in.

But that can be tricky in the Canadian Arctic, where the hours of daylight go between two extremes through the year.

Islam encourages followers in northern climates to follow the sun cycle in the closest city that has what is considered, a regular cycle — in this case Ottawa. Some Iqaluit Muslims may still follow prayer times from Mecca, the birthplace of Islam’s founder, the prophet Muhammad.

Hassan is like many in Iqaluit’s workforce — transient — and he soon plans to return to Edmonton, where he has another job lined up.

But he sees the new mosque as an anchor for his community and believes its presence will draw more Muslims to Nunavut over time.

“It’s definitely more attractive knowing there’s a mosque in a place, because you know there’s a community of your people there,” he said. “It’s also a social network and a support system.”

The lower level of the mosque features a large open space, filled with tables and chairs. This is where children will attend learning circles, Hassan said, but it also serves as the community gathering area.

That space is also one Hassan can imagine filled with non-Muslim Iqalungmiut; community members who are interested in coming by to learn more about Islam.

“It’s open to the public,” he said. “Anyone can come and see it. We’d love to let people see what Islam is all about.”

There’s been good and negative reception to the mosque’s opening, though, in a community that identifies as predominantly Christian. Hassan said the local Muslim community can be misunderstood in Nunavut, like anywhere else in the western world.

‘We’ve heard some talk about terrorism. It happens,” he said.

“But this is a chance for [Nunavummiut] to interact with our community. They may not have known that the person working in the next cubicle is a Muslim.”