“Mike understands the challenges of the North” 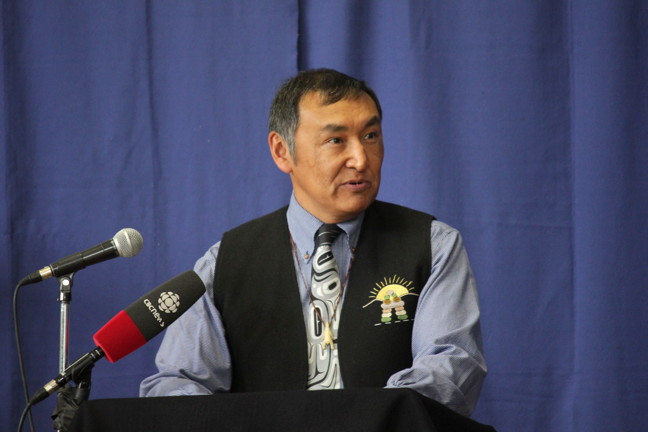 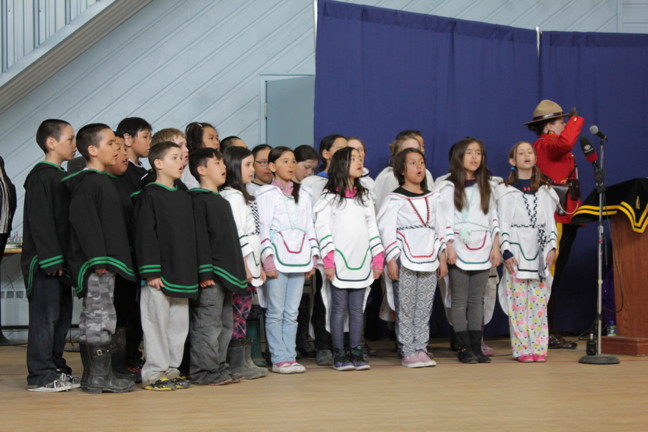 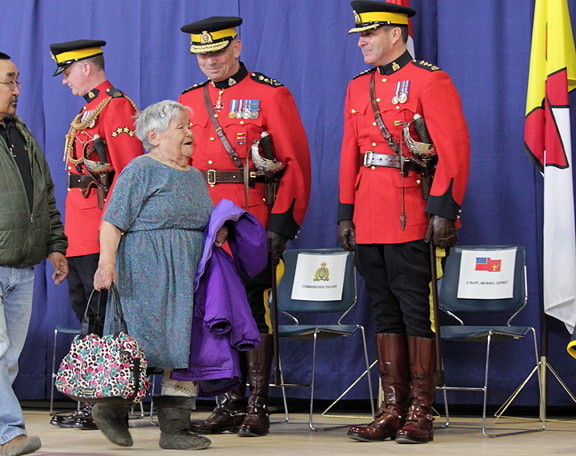 The room went quiet after elder Inuapik Sagiaktok spoke during the lighting of the qulliq. RCMP Commissioner Bob Paulson, middle, and Nunavut’s new Commanding Officer Mike Jeffrey, right, waited patiently as she picked up her purse and jacket and walked to her seat with Deal Allooloo who had said the prayer. (PHOTO BY LISA GREGOIRE)

Michael Jeffrey has one of Nunavut’s toughest jobs.

As incoming commanding officer of Nunavut RCMP “V” Division, it’s Jeffrey’s job to lead a team of officers who work in a place with the highest rates of violent crime, assault, sexual assault and homicide in the country.

He’s doing so with very few Inuit and Inuktitut-speaking officers and some detachments that only have two resident officers.

In the past month, he’s had to deal with three armed standoffs, two in Iqaluit , one of which unfolded over three days and involved a neighbourhood under lockdown, and a “suspicious package” delivered to the Nunavut Court of Justice.

But Jeffrey seemed at ease, both in his speech and when talking to reporters, following an official change of command ceremony May 28 at Iqaluit’s Cadet Hall.

“I am very privileged and humbled to become the 7th annual commanding officer in Nunavut,” he said to a small audience of colleagues, interested guests and a few Nunavut politicians, including Justice Minister Paul Okalik and Iqaluit-Tasiluk MLA George Hickes.

He admitted the lack of Inuit police officers is a problem and said it will be a priority of his command to identify and recruit Inuit. “This is a work in progress,” he said.

He acknowledged that Nunavut has a young population and that it will be up to officers, through the DARE program and other community outreach activities, to become role models and mentors to young Nunavummiut to entice them into policing careers.

The RCMP and Inuit are resilient, he said. They can work as a team to make Nunavut a safer place to live.

The RCMP’s top dog, Commissioner Bob Paulson, attended the ceremony and praised Jeffrey in his address to members of the Iqaluit detachment, lined up in red serge, and the small audience who had gathered for the event.

“Mike understands the challenges of the North,” Paulson said.

“I am very, very pleased to welcome Mike into his new role… There is no greater honour in policing than to be responsible and accountable.”

The ceremony began with a trilingual version of “O Canada” sung by the Joamie School choir. Paulson said later he doesn’t normally applaud the anthem but felt compelled to lead the applause on May 28 because he so enjoyed the students’ rendition, which included ayayas at the beginning and end.

Dean Allooloo offered a prayer before and after the ceremony, thanking police officers for helping keep their communities safe and elder Inuapik Sagiaktok lit a qulliq.

As she stood in front of the qulliq, the tiny elder was a start contrast to the three tall officers at the front of the room — Paulson, Jeffrey and Corps. Sgt. Major Darren Campbell.

Okalik also made a short speech, formally welcoming Jeffrey to Nunavut and thanking the RCMP for resolving the recent standoffs peacefully and without injury.

“As you know, we have many challenges in our territory,” Okalik said.

Jeffrey told reporters later he knows all about those challenges, having spent time at small Nunavut detachments in the early 1990s and again as Iqaluit detachment commander in 1999.

He said the key to dealing with those challenges is to consult the communities, find out what their priorities are, and focus on those.

He also said he is a firm supporter of restorative justice programs such as wellness courts, which divert certain repeat offenders to mental health and addictions treatment where appropriate.

But, he cautioned, restorative justice can only be successful if members of the community get involved by supporting the offender and his or her family both during treatment and on the long road that unfolds afterward.

After the change-of-command ceremony, organizers asked audience members to stay seated for an unexpected award ceremony.

Const. Robert Dykstra, a new RCMP member in Iqaluit who recently relocated from Nova Scotia, was recognized with a Commissioner’s Commendation for his tireless investigation into the October 2013 death of Harley Lawrence in Berwick, N.S. — the homeless man who was burned to death in a bus shelter while he slept.

Dykstra helped to track down the two men who committed the horrendous crime. They eventually admitted to killing Lawrence by dousing him with gasoline and setting him on fire and were sentenced to life in prison this past April with no chance of parole for 18 and 20 years. 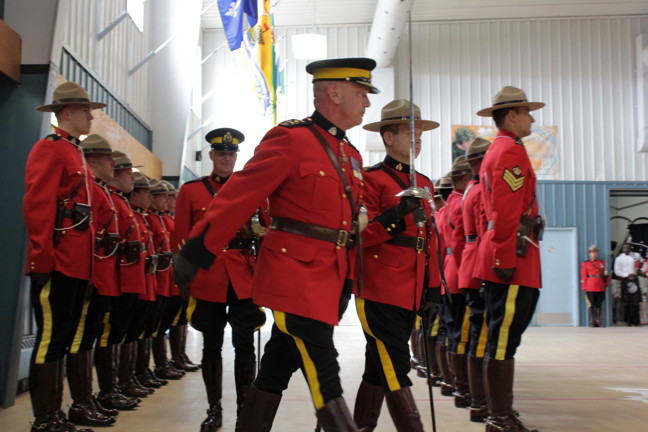 The head of the RCMP in Canada, Commissioner Bob Paulson, inspects members of the Iqaluit detachment during the May 28 installment of Mike Jeffrey as Nunavut “V” Division commander. (PHOTO BY LISA GREGOIRE)