“I hope that it’s a positive influence of some sort” 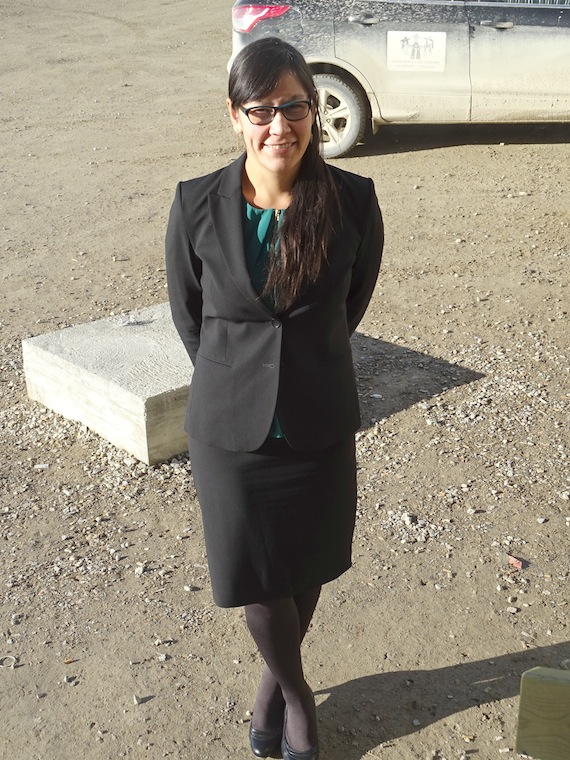 Sarah Arngna’naaq stands outside the Arctic Islands Lodge last month during a break in the court proceedings, where she served as one of the Crown prosecutors. (PHOTO BY JANE GEORGE)

Unless you have attended court in western Nunavut, you may not realize that a young Inuk lawyer, Sarah Arngna’naaq, works as a Crown prosecutor in Nunavut’s Kitikmeot region.

Once or twice a month, for the past three years, Arngna’naaq has travelled with the court to Kugluktuk, Cambridge Bay or Gjoa Haven, where she’s part of the court party and the only Inuk among the other lawyers in the courtroom.

“My ideal would be that people say, ‘there’s an Inuk who is able to stand up in court and represent the Crown,'” said Arngna’naaq in a recent interview from her home in Yellowknife.

“I hope that it’s a positive influence of some sort. Whether it is, I don’t actually know.”

Arngna’naaq, based in Yellowknife, also occasionally travels to Nunavut’s other two regions as a Crown prosecutor—a lawyer who presents the case against an accused person in a criminal trial.

Being an Inuk does offer insights in that role, she said.

“I can visualize the scenarios people are describing. I haven’t necessarily been in those positions myself, but it has a personal component for me so I think that helps, gives me some extra empathy or sympathy,” she said.

The daughter of Terri Thayer, a teacher, and Silas Arngna’naaq, a former Northwest Territories MLA and renewable resources minister, Sarah Arngna’naaq’s roots grew in Baker Lake, although she spent most of her youth in Yellowknife and then in Kingston, Ont.

But Arngna’naaq came to the practice of law via the west African nation of Ghana.

That’s where she spent time on an exchange program while studying business and international development at Trent University.

While in Ghana she had a revelation: “Why am I looking to work internationally when I could be back in Canada and help people domestically?”

So law—the practice of law in the North, among Indigenous people—seemed like the ideal choice, and Arngna’naaq, who turns 30 this month, headed to law school at the University of Victoria, graduating in 2012.

After co-op job placements during law school at the public prosecutor’s office in Yellowknife, the Government of Nunavut’s justice department and in New Zealand, Arngna’naaq discovered she was drawn to criminal law—and the role of prosecutor.

And, as a recent court circuit in Cambridge Bay showed, these are the kinds of cases that dominate Nunavut court time.

In Cambridge Bay, where Arngna’naaq served as one of two Crown prosecutors, she never hammered witnesses or the accused. Instead, she was careful to ask questions in a direct fashion, so that the information she wanted to bring up in court was raised in ways that were not leading or intimidating.

“You have to be conscious of the wording,” Arngna’naaq said, adding that it’s also been hard for her to learn how to speak in front of people.

Court proceedings are also difficult because, “you’re dealing with some of the worst things.

“You want to be able to connect with people, maintain that human component without getting personally involved, because it’s draining to see domestic violence and sexual abuse over and over,” she said.

You just have to believe that you are there “to fix people’s lives in a certain capacity,” she said.

The road to being a Crown prosecutor was in itself demanding.

Here, Arngna’naaq credits her mother, a teacher, for ensuring that she had exposure to all parts of Canadian life.

Her sister, Laura, an accountant, is also accomplished in her own right: the first Aboriginal student to enter and graduate from the University of Toronto’s demanding Masters in Management and Professional Accounting program.

Arngna’naaq, recipient of a 2014 Indspire award, has trouble imagining how students in some isolated Nunavut communities could make the switch from their limited high school experiences to the demands of post-secondary classes at a university.

While praising the Ottawa-based college program for Nunavut Inuit, Nunavut Sivuniksavut, she confided one of her dreams for the future: to buy a big house in Peterborough, Ont., near Trent University, where Inuit could live and support each other through their post-secondary studies.