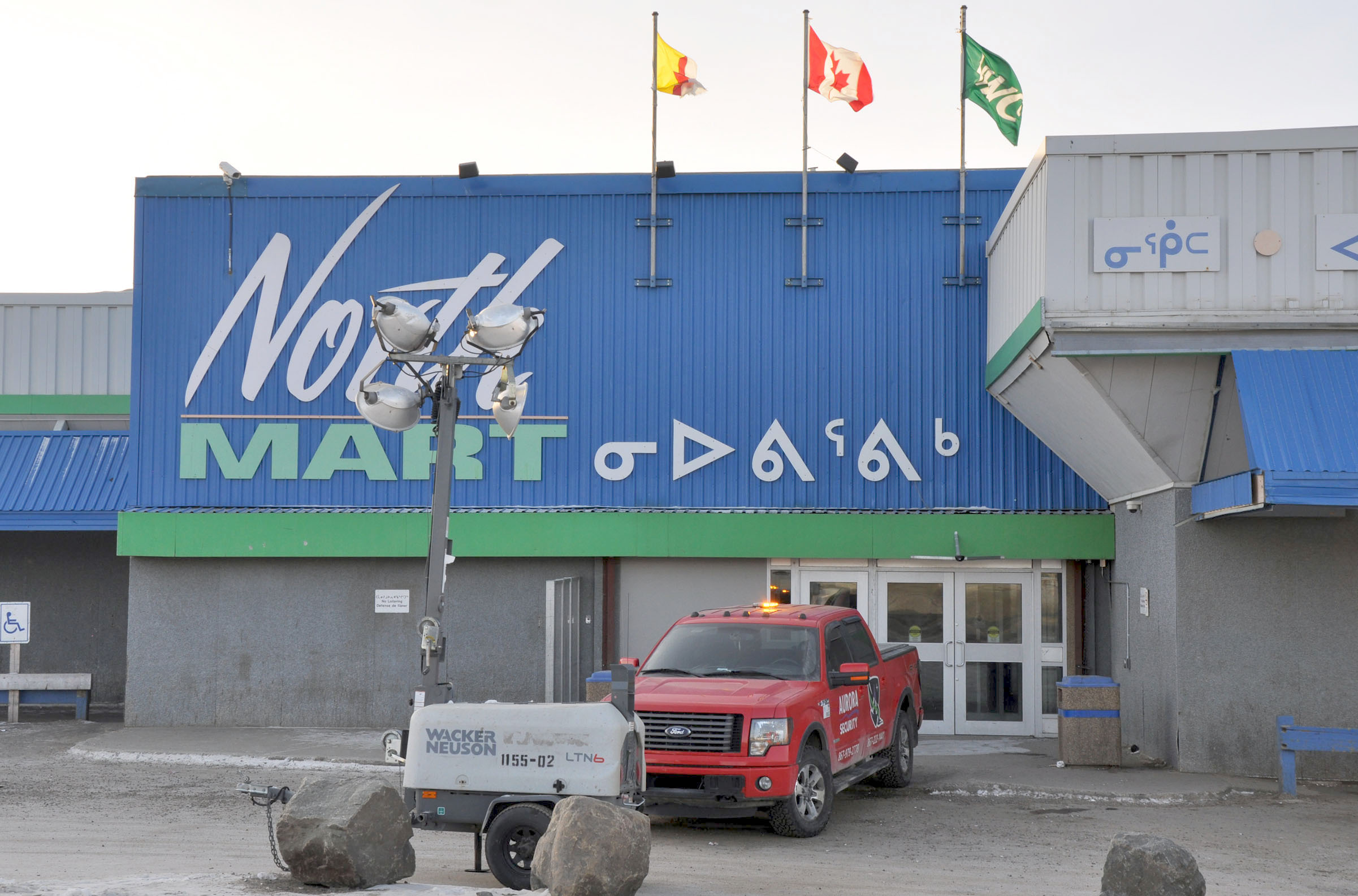 From the front, the Northmart store in Iqaluit appears undamaged on Nov. 9, a day after the fire that destroyed an adjacent warehouse and sent smoke throughout the main building where the Northmart pharmacy was located. The North West Co. said it would re-open the store on Saturday, Nov. 17. (PHOTO BY SARAH ROGERS)

“Thanks to the heroic efforts of the firefighters, first responders and RCMP, the fire damage was primarily contained to the main warehouse adjacent to our Northmart store. Without their coordinated efforts, the store would likely have been lost,” Alex Yeo, NWC’s president of Canadian retail, said in a news release.

Even before firefighters were able to put out the fire at Northmart last week, NWC was making plans to get medication out to clients who are usually served by the pharmacy located inside the store.

Tim Smith, director of pharmacy operations at the NWC, said earlier this week that everyone had been working to get the pharmacy up and running inside its former location at the store.

Smith said his pharmacy team “really stepped up,” bringing water and treats to the firefighters, communicating with residents, removing drugs and files, and cleaning the pharmacy.

“They’ve been working continuously to help get the pharmacy running again,” he said.

Smith said that “there is no contamination risk to either the public or staff related to the fire.”

“We are completely replacing our drug and supply inventory to ensure that Nunavummiut can feel confident in the medications they receive,” he said.

Although the Government of Nunavut’s Health Department says that “there is no concern” about any contamination from the Nov. 8 fire, the decision to move back into the Northmart could carry health risks, according to a smoke remediation expert who said it’s hard to remove contamination after a store fire like the one that took place at the Northmart’s warehouse and spewed smoke over a large area.

For now, Valupharm Drugs in Iqaluit is dispensing medications for residents of Iqaluit and elsewhere in the Baffin region, including those who take medication to fight tuberculosis.

“We were in early communication with Public Health and QGH [Qikiqtani General Hospital] Pharmacy to ensure that they were able to step up to temporarily fill in the gap. No patients missed tuberculosis treatment as a result of the fire,” Smith said.

Making backups of patient files and all other information is part of the pharmacy’s standard operating procedures, he said.

“We had a brief delay in being able to access that data but we now have complete availability without any loss. There was no risk of compromising any patient health information during the period in which we were unable to access.”

Getting your prescriptions filled can still require some work and patience.

Effective Nov. 13, if you are a Northmart client and require a refill of your prescription, Smith said you should contact Valupharm Drugs at 867-979-0655 and request that they have your prescription transferred.

And he said you should avoid the rapid access clinic at the QGH intended for obtaining a new prescription, if you have refills on file with the Northmart pharmacy.

That is, unless it’s for a narcotic, because those can’t be transferred from one pharmacy to another.

“If you need refills on a narcotic prescription before we are operational again, you will need to obtain a new prescription to fill at Valupharm,” he said.

Effective sometime in the morning Wednesday, Nov. 14, Smith also said clients could speak directly to his pharmacy at 975 3535 for prescription transfers or questions.

“We still aren’t ready to be open to the public and not yet ready to provide your prescriptions—but we want to talk to you and increase our support further,” Smith said early today in a posting to social media.

“We’re working hard on those final steps to get fully up and running but pretty excited to open the phone lines.”