Canadian contribution to the circumpolar “university without walls” nosedives 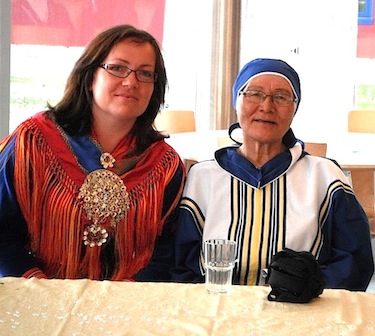 Nina Hermansen, an instructor at Finnmark University College, at the left, hosted Cambridge Bay elder and Nunavut Arctic College student Annie Neglak, right, during Neglak’s one-month stay at the college in Alta, Norway, earlier this year. In 2010, Hermansen and a colleague visited Cambridge Bay — thanks in part to UArctic North2North program. (FILE PHOTO)

While calls for a Nunavut-based university grow louder, Ottawa has pulled back on its commitment to the University of the Arctic.

Since last year, the federal government has cut more than three-quarters of the money it gives to UArctic, a “university without walls,” which includes a network of more than 140 universities and colleges around the circumpolar world.

The funding cut — from a total of more than $700,000 to about $150,000 — means Canada will lose the office it hosted at the University of Saskatchewan, which was staffed by UArctic’s dean of undergraduate studies, Hayley Hesseln.

Since UArctic’s launch in 2001, Aboriginal Affairs and Northern Development had contributed more than $4 million a year to UArctic – money that went, among other things, to develop its undergraduate circumpolar studies program, now offered through Nunavut Arctic College.

When UArctic launched, Canada’s foreign affairs department came up with $400,000 for the UArctic project, making Canada a major contributor to the circumpolar university. The Finnish government helped out UArctic by underwriting its secretariat in Rovaniemi.

And, until recently, Human Resources and Skills Development Canada chipped in $150,000 for student exchanges, like the North2North program, also offered through NAC.

This program brought several students from the circumpolar world to study in Nunavut and saw others from Nunavut, like Cambridge Bay’s Annie Neglak, travel abroad for study.

Another $60,000 came from the department of Foreign Affairs to support colleges in the three territories.

But since last year, the only funding left in place remained the $150,000 from Aboriginal Affairs for curriculum development, Hesseln said.

Hesseln said the flow of money stopped when territorial governments expressed interest in pursuing their own institutions, and the vision of what a northern university should be.

A group of about 50 academics, officials and other representatives from the three northern territories said the idea of a university in Canada’s Arctic is a sound one and worth pursuing at a November, 2010 meeting in Yellowknife.

“We’ve reached a point where the federal government is interested in funding the University of the Arctic, but the territories want to do their own thing,” she said.

The result is that Canada will have little say in the UArctic network’s curriculum development, she said, while Canadian students will have a more difficult time accessing its programs, offered through 33 Canadian universities.

There have been eight Canadian graduates from UArctic since it launched, including one Nunavut student from its circumpolar studies program.

But, of the network’s 50 universities located in the circumpolar world, none are in Canada.

And that situation has many in Nunavut, including members of Nunavut’s Ilitturvik university society, lobbying for a “bricks and mortar” institution in the territory.

While any funding cuts can hurt access to education, Ilitturvik’s Kirt Ejesiak says these do not necessarily mean there’s a lack of support for an Arctic university.

“If anything, it creates an opportunity for the federal government to come to the table and work towards a goal for Arctic education,” he said.

Ilitturvik’s vision is an institution based in the Canadian Arctic that would target students from the country’s four Inuit regions, with programs in such areas as Inuit studies, linguistics and indigenous law.

The group has considered different models for how the university would be structured, but says it must operate autonomously.

“The barriers [against Inuit] that existed in the 1950s still exist today,” Ejesiak said. “Only through an independent institution could we break out of that shell and advance as a society.”

The four-member group has also had trouble gaining traction with the federal government, Ejesiak said.

But Ilitturvik plans to hold a public meeting soon to attract more members, he said.