“You can’t replace the therapies you get with family, the strength you get through having them here” 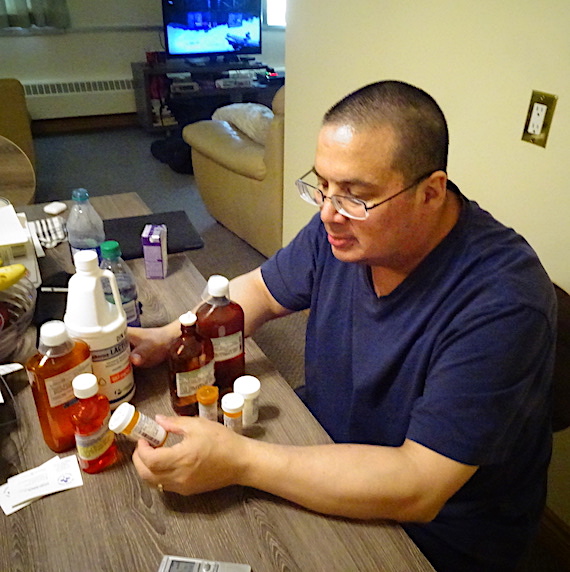 Richard Paton looks at some of the many medicines he has to take daily. Although the radiation and chemotherapy treatments help kill his cancer, they also cause a variety of side effects. (PHOTO BY JANE GEORGE) 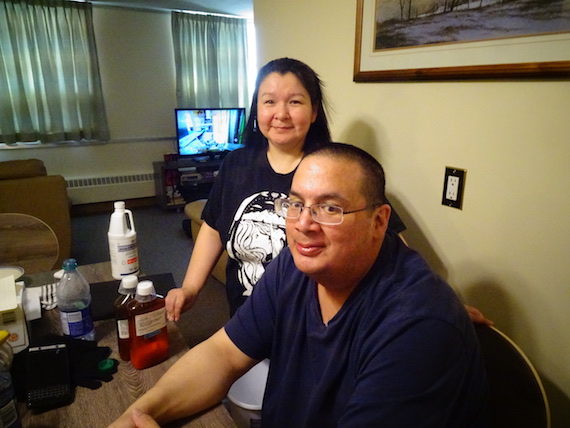 Jimmy and Richard Paton are in Ottawa together, along with their four sons, as he undergoes treatment for throat cancer. (PHOTO BY JANE GEORGE)

OTTAWA—More than 3,000 Inuit from Nunavut’s Baffin region arrive in Ottawa every year for health treatment that’s not available in Nunavut.

But the services in place for these ailing Nunavummiut are not family-friendly, says cancer patient Richard Paton.

That was before Paton, 50, learned he had a five-centimetre mass on his tonsils, which had spread into the space behind.

Now, many know Paton’s story of how he remained in Ottawa for treatment.

That’s because Paton decided he had to start telling the story of his cancer diagnosis and treatment on social media and on an online fundraising site.

Paton said that was hard, but he had to do it to raise money to bring his wife, Jimmy, and four sons to Ottawa to support him through his treatment.

“I think, where would I be without my family? I’d probably be a lot worse off physically and emotionally,” Paton told Nunatsiaq News in an interview at the Ottawa Hospital residence where he and his family now rent an apartment.

Every week, Paton undergoes rounds of radiation therapy and chemotherapy at the Ottawa Hospital’s general campus.

Several weeks into his treatment, Paton, a sturdy man, has lost a lot of weight and his voice is raspy.

He can no longer eat or drink, and receives all his food—as well as his many medications for pain and infections—through a peg installed in his abdomen.

He has sores in his mouth and is often in pain. Sometimes he takes tiny sips of water and swallows it so that his muscles won’t forget how to do that.

Last week, he asked his doctors to skip the planned chemotherapy injections because he had come down with pneumonia.

Paton said, for him, having his family close by is more important than any treatment provided.

A recent report done for the Ottawa Hospital, titled Stronger Voices, Better Care: Serving the People of Nunavut, produced to recommend better ways of accommodating Inuit at a new complex that will replace the existing Civic campus, found that Inuit who travel south for treatment often feel as if their social foundations have collapsed.

“The effects can be debilitating, and our participants urged that more be done to help patients adjust to this loss when they come to Ottawa for treatment,” the report said.

Paton’s experience suggests that hospital planners still have some work to do. Had Paton decided to stay at Larga Baffin, the boarding home for Baffin Inuit in Ottawa, his children couldn’t have stayed with him.

As a Government of Nunavut employee, Paton was able to stay in a hotel for his first 40 days in Ottawa. He and his family then tried an outpatient residence called the Rotel, but found that there you can’t cook.

So they’re now staying at the Ottawa Hospital’s Civic campus outpatient residence, which costs $98 a night, but provides a full kitchen and enough space for the family of six.

Had Paton decided to stay at Larga Baffin, without his family, the total cost of his lodging and medications would have been covered.

As a Nunavut Agreement beneficiary, those costs are normally supposed to be covered by the federal Non-Insurable Health Benefits program. But now that he’s out of Larga Baffin, that no longer appears to be possible.

For example, Paton relies on Resource 2.0, a boxed liquid substance filled with proteins and other nutrients, to sustain him. But he said he has to pay for this himself and can only recoup 80 per cent of his costs through his employer’s supplementary health insurance plan.

In addition, he has to pay for his medical equipment, such as a special device that he can rent for $100 a month to help control the mucus in his mouth, a side-effect of chemotherapy and radiation.

He faces many other costs, such as groceries and transport costs to medical appointments, he said.

And his sons are not in school.

But, on that, Paton said it’s better for his children to be with him now as a learning experience.

“You can’t replace the therapies you get with family, the strength you get through having them here,” he said.

Jimmy, who was just ready to finish her teaching degree at the Nunavut Teachers Education Program in Iqaluit, is now in Ottawa to help her husband.

“I am very fortunate to be with my husband and my kids, too,” she said as she washed and dried some of Paton’s equipment.

People have been generous in their support for his online campaign, Paton said.

But if the Patons have to stay beyond April, money will become short: the family has no income at all as Paton waits for long-term disability payments to start.