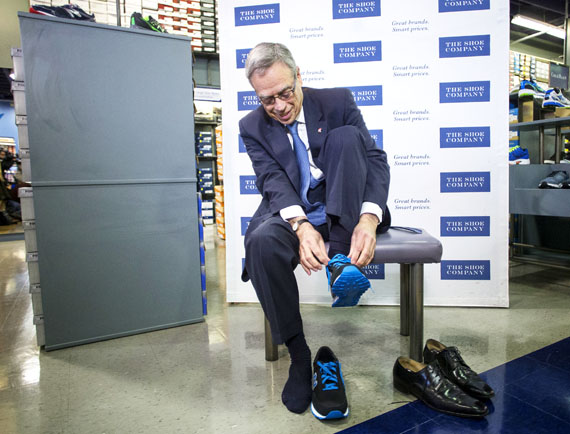 In a photo distributed April 20 as part of a publicity gimmick, Finance Minister Joe Oliver tries on a pair of New Balance sneakers at a Shoe Company outlet in Toronto. That’s because he delivered a balanced budget April 21, with a small $1.4 billion surplus, but with a contingency fund of only $1 billion. (PHOTO COURTESY OF FINANCE CANADA)

The governments of Nunavut and the Northwest Territories will get bigger credit limits — but not much else — out of Finance Minister Joe Oliver’s 2015-16 budget, tabled April 21 in the House of Commons.

He said that’s because Nunavut has no choice but to borrow money to pay for badly-needed critical infrastructure.

This past February, Peterson also said he wanted $300 million for more social housing and $200 million to upgrade power plants.

Oliver didn’t mention Nunavut in the text of his April 21 speech — but the debt cap increase is listed in the main budget document.

And his budget contains no new money for social housing in either Nunavut or Nunavik, and no specific infrastructure help for Nunavut’s power utility.

Most of Nunavut’s current $400-million debt cap was maxed out by borrowing commitments the Government of Nunavut took on to pay for the 34-year public-private deal that will see a new airport built and operated in Iqaluit by a private consortium.

The Government of the Northwest Territories will see its debt rise from $800 million to $1.3 billion.

At the same time, the territorial formula financing system — which gives the GN most of the money it needs to run programs and build things — will not change.

Many families in Nunavut with children will likely get more money in the mail because of changes to the Universal Child Care Benefit that were announced in the fall of 2014.

Families who qualify for these benefits should start seeing cheques in the mail this July.

Oliver was able to say that he kept his promise to deliver a balanced budget.

He’s forecasting a small $1.4 billion surplus by March 31, 2016, but the government’s contingency fund will go down to $1 billion from $3 billion in the upcoming fiscal year.
And people saving their money may benefit from an increase to annual contribution limit for the Tax-Free Savings Account plan.

The budget also promises $5.7 million over five years to help sealers find new markets for seal products — but there are few details right now about how that would work.

“Inuit look forward to working with the federal government to develop a certification system for products derived from Inuit seal hunting. Indeed, only through the active participation of Inuit in this process can we overcome the inadequacies of the exemption for Inuit products outlined in the legislation that banned entry of Canadian seal products to European markets in 2009,” Audla said.

And the government will continue infrastructure spending previously announced in 2013 through the Building Canada fund, the Gas Tax fund and the P3 (public-private partnership) Canada fund.

“It is particularly encouraging to see support for bundling smaller projects to qualify for the P3 Canada Fund. Despite expansion of the eligibility criteria in 2014, northern communities have experienced difficulty in accessing this program and we hope to benefit from it going forward,” Audla said.