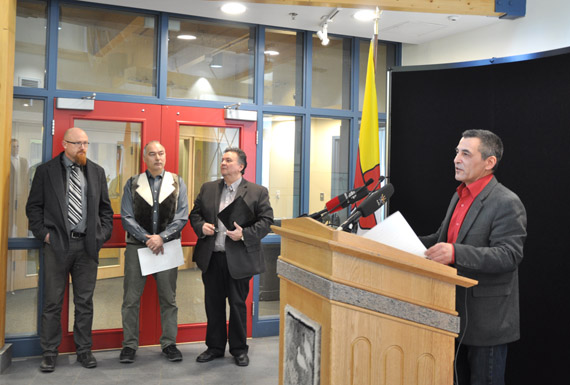 Nunavut MP Hunter Tootoo came home to Iqaluit Feb. 29 to announce millions in funding for arenas, playgrounds and other pieces of infrastructure across the territory.

Under the federal New Building Canada Plan’s Small Communities Fund, Nunavut gets just over $25 million, money that had already been budgeted for the territory.

The $25 million will be spread among five different projects, including upgrades at community arenas across the territory and to replace playground infrastructure.

The remainder of those funds will be directed to Iqaluit’s new aquatic centre and the Kenojuak Cultural Centre in Cape Dorset — the first time either of those projects have received help from Ottawa.

“We know that infrastructure needs here in Nunavut run very deep,” Tootoo told a Feb. 29 press conference. “Our government also knows that we need to invest in our communities, especially during challenging economic times.”

Of that $25 million, Iqaluit’s aquatic centre will receive $4 million to offset the overall $40.5 million the centre is expected to cost.

Romeyn Stevenson said the centre will offer Iqalungmiut a number of wellness activities, all in the proximity of the city’s core.

The expected completion date for the Iqaluit Aquatic Centre is 2017, with completion of the exterior building expected this summer.

In Cape Dorset, private fundraising efforts are underway to offset the estimated $10 million cost of a facility meant to house the West Baffin Co-op’s Kinngait studios. The project will receive $2 million from the Small Communities Fund.

But the majority of funding announced Feb. 29 — more than $18 million -— will go to upgrading community arenas around the territory. An additional $1.2 million will pay for replacing playground infrastructure.

Tootoo, who serves as minister of Fisheries, Oceans and the Canadian Coast Guard, did not have news on the status of two long-awaited port projects, in both Iqaluit and Pond Inlet.

The GN said in January that it was finalizing an agreement with the federal government for its $63 million contribution towards Iqaluit’s $84 million deep water port project.

But Ottawa’s support hinges on the GN kicking in its share of $21 million, an amount the GN said MLAs were set to vote on during this sitting of the legislative assembly.

“My understanding is that we’re in the process,” Tootoo said, adding that he’s still waiting on a response from the territorial government.

For his part, Premier Taptuna said his government is waiting for the “i’s and t’s to be dotted and crossed.”

“The sooner the better,” Taptuna said Feb. 29. “We’ve been talking about this for a long, long time.”

In the lead-up to the last federal election, former Nunavut MP Leona Aglukkaq pledged up to $30 million towards a small craft harbour in Pond Inlet, a promise Liberal candidate Tootoo, now MP, said he would uphold.

But the Liberal government has yet to commit any money to the small port in Pond Inlet.