“Food is a big thing in my culture. Everything you do, there seems to be food” 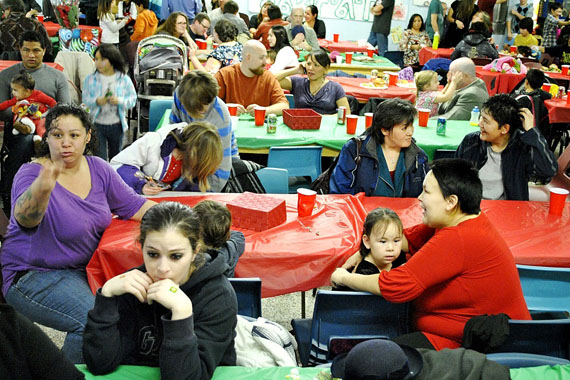 The Inuit community in Ottawa enjoyed a big Christmas party Dec. 8, held at the Rideau High School and hosted by the Ottawa Inuit Children’s Centre. (PHOTO BY BRIELLE MORGAN)

Ottawa’s Inuit community came out in droves for a children’s Christmas party at Rideau High School this weekend.

While chunky, white flakes swirled outside the steamy windows, inside, the cafeteria was packed wall-to-wall with dancing feet and glittery, painted faces. (See slide show embedded below.)

The party was hosted by the Ottawa Inuit Children’s Centre.

“It’s really about giving people a northern experience in the middle of the south,” said Karen Baker-Anderson, executive director for OICC.

Baker-Anderson is not an Inuk, but she says working in Ottawa’s Inuit community for the past 17 years has been an honour and an inspiration.

“I think we learn a lot from the people in this Inuit community… people sharing food, people caring for each other’s children, people checking in with each other. We don’t do enough of that in Canada, or in Ottawa.”

For Reepa Evic-Carleton, the generous spread of caribou, Arctic char, and narwhal was central to the party.

“Food is a big thing in my culture. Everything you do, there seems to be food. So it’s wonderful, and I think it grounds people too, because it’s hard to be in a big city like this.”

Evic-Carleton’s been in Ottawa since 1991, but she’ll always miss home.

“The weather, the snow, the cold, just the fresh air up north, and family… family is a big one for me.”

While for some the party was a reminder of family up north, for others it was a way to engage children in traditional culture – from Inuktitut songs to accordion music.

“For a lot of the kids it creates a safe environment for them to be themselves and to celebrate our culture,” said party MC Steven Carleton.

For nine-year-old Meeka Sundu, “getting stickers and an eraser and a crayon from Santa,” was the best part of the party.

For seven-year-old Katsua Horvath, it was “making the cookies.”

And for a stage full of little girls, it was the “DANCING!”

But for six-year-old Jonathan Lewis, it wasn’t an easy decision.

“It’ so beautiful… people are getting face paints… I had cookies and some chips. It’s so lovely and people get presents.”

Meanwhile, for Jane Truelove and Brian Horvath, celebrations like these are not only fun, they’re essential. While not Inuit themselves, their three adopted children – Katsua, Cynthia, and Keenai – are of Inuit descent.

“We take the respect of Inuit culture very seriously. I know of people that have adopted Inuit children and they’re just gone from the community… for us, that’s never an option.”

Truelove says getting together with other Inuit families at the OICC’s annual party is something they always look forward to.

“We adopted them and the community adopted us… We forget that we’re not Inuit too, sometimes.”