“I have never seen Indigenous health status improve in cities” 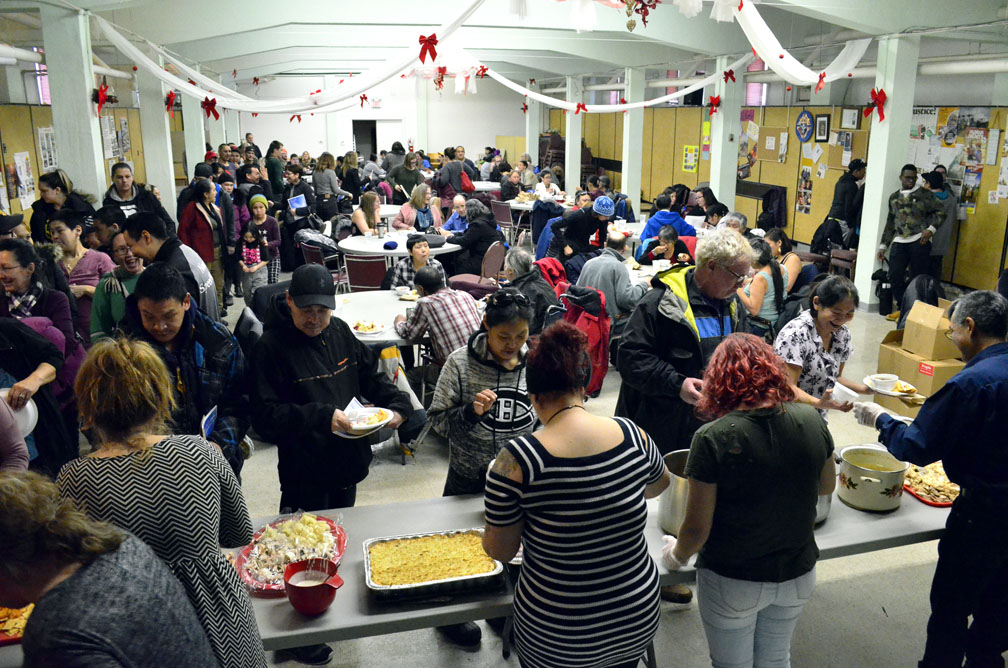 About 200 Inuit living in Ottawa enjoyed Tunngasuvvingat Inuit’s monthly feast, held yesterday at Our Lady of Assumption Church in Vanier. A report launched at the event finds that the health status of Inuit living in the city is generally no better than that of Inuit living in northern Canada. (PHOTO BY JIM BELL) 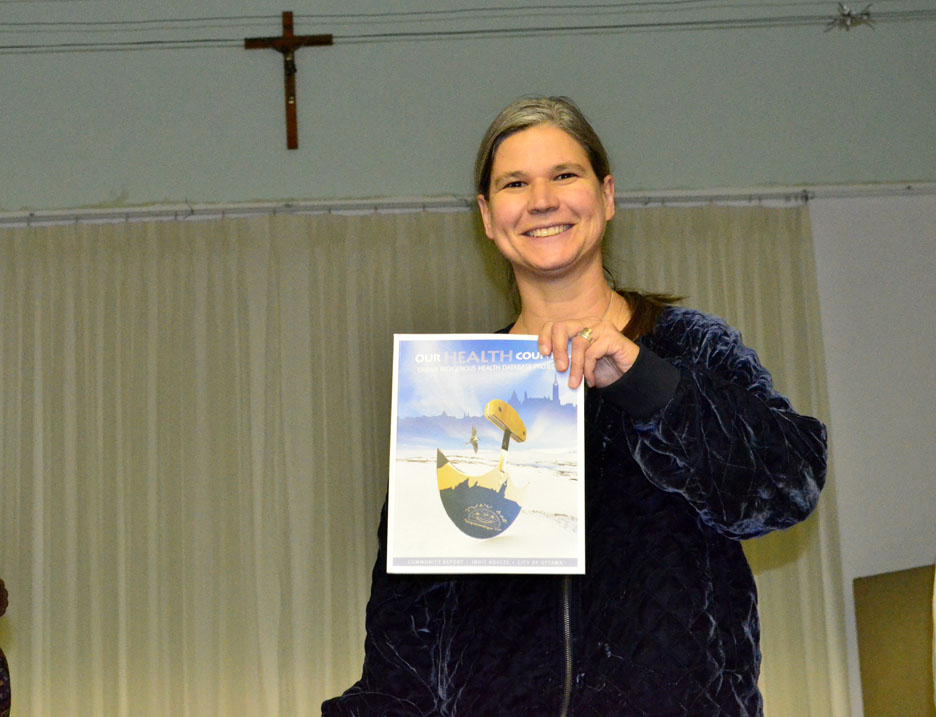 Dr. Janet Smylie of the Centre for Urban Health Solutions at St. Michael’s Hospital displays a copy of Our Health Counts, a report on the health status of Inuit living in Ottawa. Smylie and Tungasuvvingat Inuit put the study together with a network of people from the Inuit community in Ottawa. (PHOTO BY JIM BELL) 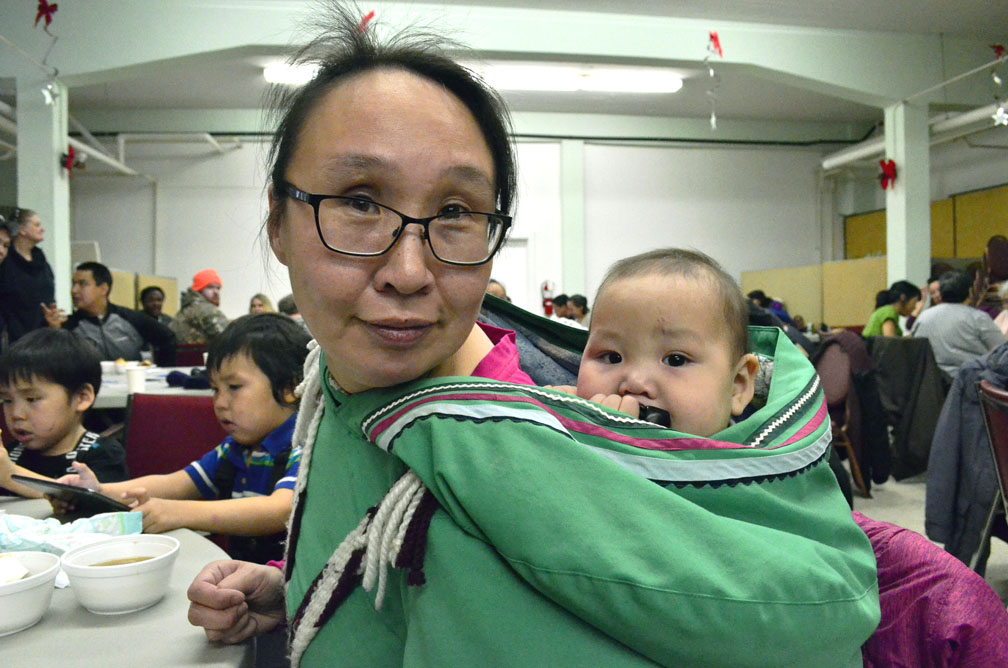 Jeannie Malliki and baby Benjamin Malliki enjoy themselves at Tungasuvvingat Inuit’s latest monthly feast, held Jan. 18 at Our Lady of Assumption Church in the Vanier neighbourhood of Ottawa. The event brought more than 200 Ottawa Inuit together to enjoy food and companionship. (PHOTO BY JIM BELL)

OTTAWA—The health status of Inuit living in Ottawa is no better, for the most part, than that of Inuit who live in the four regions of Inuit Nunangat, a 66-page report launched yesterday has found.

The Tungasuvvingat Inuit report, titled Our Health Counts, is based on data gleaned from 345 Inuit adults living in Ottawa in 2010, a sample big enough to draw conclusions about the general health status of Inuit in the city.

Dr. Janet Smylie of the Centre for Urban Health Solutions at St. Michael’s Hospital in Toronto worked with TI and a network of grassroots Inuit in Ottawa to gather and assemble the data, with funding from the centre where she works, and from the Ontario government.

Smylie said the report explodes a big myth that’s held by many: that Inuit living in the city enjoy better health simply because they are closer to doctors, hospitals and health centres.

But the health status of Inuit does not improve when they move to the city, and there is “very little difference” between their health problems and those experienced by people who live in the Inuit homeland, she said

This is borne out by many of the report’s findings:

• More than 55 per cent of study respondents had spent one night or more in a hospital in the five years prior to the survey, compared with only 15 per cent for the general population of Ontario.

• A larger proportion of the Inuit population in Ottawa reported symptoms of anxiety and depression compared to the general population and 77 per cent reported that a close friend or family member has died by suicide.

• One quarter of Inuit living in Ottawa reported that someone in their residence had physically hurt them.

• About 43 per cent of those who had been hospitalized found the quality of their care unsatisfactory, suggesting that close proximity to health services does not guarantee access.

“There appears to be a significant problem with the perceived quality of hospital care for Inuit in Ottawa that requires further investigation,” the report said.

The report also said Inuit in Ottawa suffer from screw-ups caused by squabbling between different jurisdictions over who is supposed to cover their health care costs.

One egregious example involves two elders suffering from incurable cancer who had been receiving care at an Ottawa hospital for three months.

To ensure their Nunavut health coverage did not lapse, the health system flew them back to Nunavut, even though they were very sick.

“Adding to the anxiety and discomfort caused by this socially and medically unnecessary travel was the fact that they did not speak English and they did not understand what kind of cancer they had or what treatment they were receiving,” the report said.

Another anecdote illustrates how health problems among Inuit in Ottawa are exacerbated by discomfort with the system and that some only see a health care provider if they have an urgent health concern.

That case involves a 55-year-old woman, literate in English and Inuktitut, who had not seen a health care provider for 35 years.

After going to the TI family health clinic in Ottawa, health workers discovered the woman suffered from a long list of health problems, including chronic hepatitis, tuberculosis and orthopedic problems.

“She had been hiding her lack of comprehension of her medical problems, not wanting to impose on others,” the report said.

Other respondents reported they have problems with long waiting lists, and not having enough money to pay for transportation.

And the report also found many Inuit adults in Ottawa are thwarted by various social and economic barriers:

• 29 per cent reported times when their household could not gain access to healthy food over the past year.

• 54 per cent reported they did not have work that paid wages within the year prior to the survey, an unemployment rate nine times greater than that of non-Inuit in Ottawa.

“It is clear that the Inuit population in Ottawa is experiencing major disparities with respect to access to and completion of formal educational programming compared to the general Ottawa population,” the report said.

And the report also found large numbers of Inuit in Ottawa suffer disproportionately from discrimination from health care workers and other service providers.

“According to results, 27 per cent of Inuit in Ottawa have been treated unfairly or kept waiting because they are Inuk by a doctor, nurse, dentist, law enforcement personnel, social worker, lawyer, judge and/or other professionals,” the report said.

• Confirmation that the Ottawa Inuit population is four times greater than the numbers estimated by Statistics Canada. That likely means the actual number of Inuit living in Ottawa is at least 5,000.

• The Inuit community in Ottawa is established and long-term, with more than half, 56 per cent, of respondents reporting that Ottawa is their permanent home.

• A significant minority of Inuit in Ottawa—44 per cent—are staying in Ottawa temporarily for health care, education and jobs.

• More than 40 per cent of Inuit adults in Ottawa are under the age of 35.

The report recommends that:

• The funding for municipal, provincial and federal programs should be adjusted to reflect the actual size of the current Inuit population in Ottawa.

• Municipal, provincial and federal governments should work together to improve access to health care for urban Inuit.

• Governments should work together with Inuit organizations to ensure that all Inuit in Ottawa have access to trained Inuit cultural interpreters when they are using health and social services.

• The Ottawa Hospital and TI should work together to better understand why so many Inuit in Ottawa use hospital emergency rooms.

• All levels of government should fund the Mamisarvik Healing Centre to serve Inuit no matter where they live.

• Governments should prioritize Inuktitut-specific health and social services and programming for Inuit living in Ottawa.

Smylie said a similar report on the health status of Inuit children in Ottawa will likely be released later.

And she said that TI is pursuing the idea of doing a follow-up survey for comparison with the data from 2010.

TI, which represents urban Inuit in Ontario, launched the report at their monthly feast for the Ottawa Inuit community, held at Our Lady of Assumption Church in Vanier.