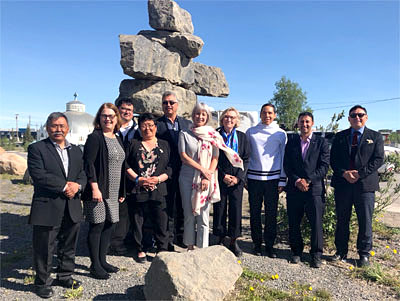 Federal ministers stand with Inuit leaders in Inuvik, N.W.T. on June 27, where they met as part of the Inuit–Crown Partnership Committee and decided to create an Inuit version of Jordan’s Principle. (HANDOUT PHOTO)

The families of Inuit children, no matter where they live in Canada, may now get federal government help in gaining access to essential but expensive health and social services, Indigenous Services Minister Jane Philpott said yesterday.

Ottawa is doing this through interim measures that will be used until Inuit Tapiriit Kanatami, the Department of Indigenous Affairs and provincial-territorial governments finish work on an Inuit-specific child-first policy through the Inuit-Crown Partnership Committee.

Within that Inuit-specific child-first policy, ITK and Indigenous Services will create an Inuit version of Jordan’s Principle.

Jordan’s Principle is a concept intended to protect First Nations children when federal, provincial and territorial governments can’t agree on who should pay for expensive health care treatments.

It’s named after Jordan River Anderson, a boy from Norway House Cree Nation in Manitoba who died of a rare muscular disorder while Canada and Manitoba fought over who should pay for his home care.

Philpott and ITK President Natan Obed announced their intention to create an Inuit-specific version of the child-first policy this past July, at a meeting in Inuvik.

And, yesterday, ITK and Indigenous Affairs confirmed that the parents of Inuit children may now use interim measures under the policy.

Those interim measures are explained on this web page.

“This announcement allows Inuit families to access key health, social and education-related services now, under the existing Child First Initiative framework, while an Inuit-specific framework is being developed. For Inuit families, these services are life-changing and long overdue,” Obed said in a news release.

To gain access to those services, the parents or guardians of Inuit children may contact regional representatives designated for each province and territory.

To be eligible, a child must be recognized by an Inuit land claim organization, and under the age of majority in their province or territory of residence.

Requests may be submitted by:

Here are some examples of health and social services that could be funded under the Inuit-specific child-first policy: