“How long will it take for this to be fixed?” 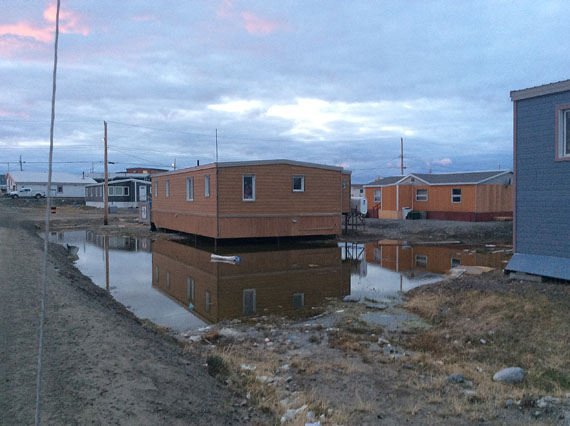 This five-bedroom house in Rankin Inlet, now completely surrounded by water, is home to an 80-year-old elder and five families, including seven children aged nine months to 12 year old. Every spring, meltwater collects underneath and surrounding the home, creating mold and other safety issues. (PHOTO BY MARY-ROSE ANGOSHADLUK)

Mary-Rose Angoshadluk is worried for her aging mother.

The family matriarch, Monica Ugjuk, is 80 years old and lives in a five-bedroom home in Rankin Inlet that she shares with 15 other family members — seven of them are children between nine months and 12 years old.

Located in Rankin Inlet’s area 6 neighbourhood, the home sits on a street corner that dips down away from the roadway, located in a basin that collects snow through the winter, and melt-water each spring.

“[My mother has] had to call us more than once to shovel them out,” she said.

Then every May, the melt-water settles around the house like a pond, rising as high as the home’s flooring. That’s created mould in recent years, Angoshadluk said, and the moisture has rotted any insulation under the house.

A photo Angoshadluk took of the house on June 21 shows the home surrounded by water.

“That’s nothing compared to early spring, as soon as the snow melts, the water goes even higher than that,” she said. “They’ve been promising for the last five years that they would lift the house, but they haven’t done anything.”

“They” is the Nunavut Housing Corp., which manages social housing units across the territory. The NHC did not return Nunatsiaq News’ call by our press time.

At Rankin Inlet’s hamlet office, planning and lands administrator Ashley Ymana said that home owners have a municipal land lease that holds them responsible for the upkeep of the land around their homes, which would include ensuring proper drainage.

For social housing tenants, however, that responsibility rests with the NHC.

The hamlet is responsible for opening culverts, or drains that run under roadways, Ymana said, to help drain certain areas of the community.

Angoshadluk said the hamlet did open culverts along the nearby roadway this week, which has helped drain much of the water for now — but it doesn’t solve the recurring problem.

The risk of illness for the home’s 16 occupants is high due to the presence of mould, she said.

Angoshadluk said there have also been instances where children have almost drowned in the water that accumulates around the house.

“They’ve waited and waited and nothing has ever happened,” she said. “How long will it take for this to be fixed?”

A previous version of this story said that both home owners and social housing tenants are responsible for maintaining the land around their homes. In fact, only a home owner’s municipal land lease requires them to do that upkeep.