Owners of Iqaluit’s iconic cafe reminisce before moving on

“Whether you sat at that table or this table, everyone got involved in the conversation” 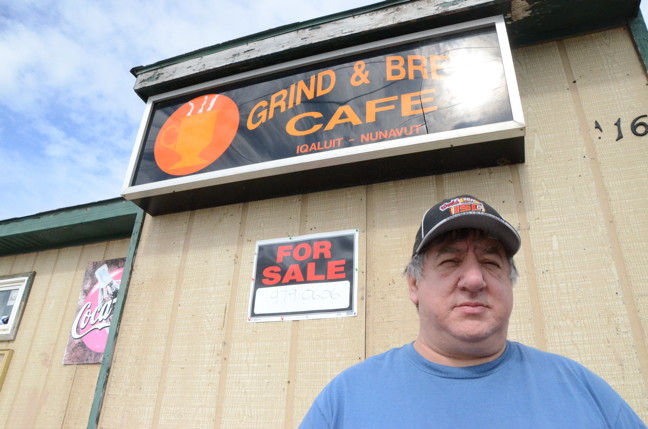 Manager of the Grind and Brew, Brian Twerdin, says long days at the café have taken their toll and it’s time he stepped back and spent some time with family. (PHOTO BY DAVID MURPHY)

Iqaluit’s Grind and Brew is for sale.

That’s not breaking news — many in the city have seen the “For Sale” sign tacked onto Brian Twerdin and Elisapee Sheutiapik’s iconic beach-front business for a while now.

As much as the pair have enjoyed running the café for more than 15 years, they say it’s time to move on to other things.

They recently sat down with Nunatsiaq News to explain why, and to reminisce a little.

Inside the homey brown shop there’s a familiar smell — pizza and coffee. And to nobody’s surprise, another familiar sight: Twerdin in a baseball cap and worn t-shirt. He and Sheutiapik will keep the cafe open until they sell it.

Twerdin kicks everyone out other than long-time customer Pastor Wayne Moore. He sits down at a table and calls Sheutiapik — owner of the establishment and former Iqaluit mayor — and they talk about old times for the better part of 30 minutes.

The common-law couple has three main reasons for selling.

“I’m dealing with some medical issues. And the other thing is, I’ve been in Iqaluit, Frobisher Bay, for 40 years. So I’d like to do something else, I’d like to go enjoy myself,” Twerdin said.

The third reason has to do with family. Twerdin misses family dinners and hockey games with his two sons.

“I’m here seven days a week, sometimes six o’clock in the morning to nine o’clock at night,” Twerdin said. “And you don’t get to spend much family time that way, you know?”

Sheutiapik has owned the Grind and Brew since 1998 — back when it was located near the Four Corners — and Twerdin manages the place.

Sheutiapik splits her time between Iqaluit and Ottawa, and said over a spotty speakerphone connection that it just feels like the right time to let the place go.

The final decision came when Twerdin was in Ottawa for medical treatments and the doctor told him to slow down and take care of his health, she said.

Their intention is not to sell it to just anybody. Sheutiapik insisted their legacy has to go to the right people.

“There’s offers on the table — and I’m not jumping the gun. We certainly want to sell, don’t get me wrong, but we also want to make sure… that it goes to the right people, that’s going to fit the community,” Sheutiapik said.

Offers so far include a mix of uses for the little café by the breakwater, overlooking the bay.

Some people are interested in continuing to run the business. Others just want to buy the building.

Nothing will ever take away the memories in that place, however.

Twerdin recalls his favourite memories over the years, including elections won at the Grind and Brew.

But regulars will likely remember the Grind and Brew as Iqaluit’s version of the sitcom classic, Cheers — just without the booze.

The Grind and Brew’s been like a community centre to Iqalungmiut. Twerdin has loyal customers from all walks of life and he makes sure he helps those in need whenever possible.

“I don’t want to blow my own horn or word it incorrectly. But we’ve got a lot of shelter guys come here, and I’m pretty good to them. I make it easy for a lot of them… a place to go,” Twerdin said.

Sheutiapik said Twerdin always slips a juice box or two to the kids in the neighbourhood as well.

“And then he tells them — you know I’m giving you a treat, but make sure you keep your playground clean, and those kinds of things,” Sheutiapik said.

Pastor Moore has been a customer since before the business moved by the breakwater. He said there was a sense of “real community” in earlier days, too.

“I used to like coming down here in the early days here because it would always be full of people and they would always get in these conversations,” Moore said.

“And whether you sat at that table or this table, everyone got involved in the conversation,” he said.

If Twerdin had a chance to press the reset button on his life, the Grind and Brew might look a little different than it does today.

“If I was 20 years old and started again — first floor would be a restaurant, second floor would be apartments that would generate revenue. And on the third floor I’d have the biggest patio, looking down the bay,” he said.

Twerdin and Sheutiapik are still taking offers. And Twerdin said when they do sell, that doesn’t mean he’s leaving, although he would like to travel a little.

Sheutiapik had one last message to the G & B’s loyal customers: nakurmiik.

“I want to thank the community for supporting us. Because if we didn’t have the customers we would not succeed,” she said.

“And I think it’s because I always said I wanted a family environment. I want people to come and be comfortable. I’ve always ensured we’d have majority Inuit employment. That’s very important to me.”