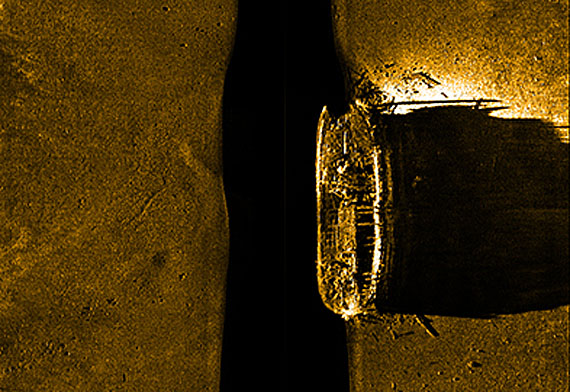 This sonar image from Parks Canada shows wrecked ship lying at the bottom of the sea, found Sept. 7 in the area of Victoria Strait. The wreck is believed to be one of ships lost in the Franklin Expedition of 1845-46 — either the HMS Terror or HMS Erebus. (IMAGE FROM PARKS CANADA) 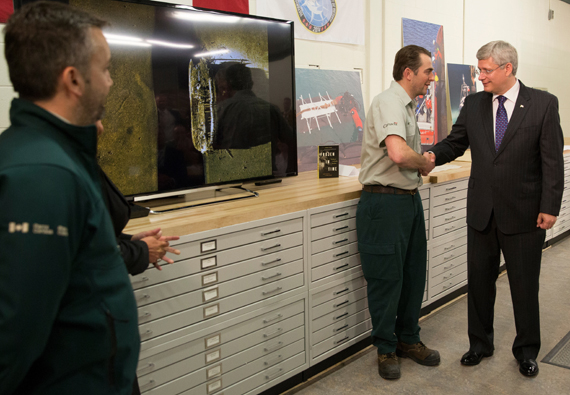 Prime Minister Stephen Harper congratulates Ryan Harris, Parks Canada’s senior underwater archaeologist and project lead for the 2014 Victoria Strait Expedition, for the discovery of one of the ships belonging to the ill-fated Franklin Expedition lost in 1846. Harper announced the finding moments before, Sept. 9, from Parks Canada laboratories in Ottawa, with a display of a sonar image of the shipwreck, at left. (PHOTO COURTESY OF PRIME MINISTER’S OFFICE)

Prime Minister Stephen Harper announced, on Sept. 9, the discovery of one of two ships lost during the ill-fated Franklin Expedition of 1845-46.

“This year’s Victoria Strait Expedition has solved one of Canada’s greatest mysteries, with the discovery of one of the two ships belonging to the Franklin expedition lost in 1846,” a Harper, grinning from ear to ear, said at a televised press conference in Ottawa.

“Although we do not know yet whether the discovery is HMS Erebus or HMS Terror, we do have enough information to confirm its authenticity. This find was confirmed on Sunday, September 7, 2014, using a remotely operated underwater vehicle recently acquired by Parks Canada,” Harper said in a news release from the Prime Minister’s Office.

Images from Parks Canada show what appears to an overhead view of a ship’s hull, lying on the seabed.

The federal agency, which has been searching for the lost ships since 2008, did not immediately say exactly where the ship was found.

This year’s campaign to find the ships and related remains, known as the “2014 Victoria Strait Expedition,” centred on an area in and around Victoria Strait, located between King William Island and Victoria Island.

Search efforts this year include an unprecedented number of government agencies and private organizations and people, including wealthy philanthropist Jim Balsillie, whose Arctic Research Foundation has outfitted the Martin Bergmann scientific vessel.

Most activity has centred on searches at sea.

But the first find occurred on land Sept. 1, when Government of Nunavut archaeologists found two artifacts on islands in an area southwest of King William Island.

The territorial government announced Sept. 8 that an archaeology team had found an iron fitting described as a “boat-launching davit,” and another wooden object.

The fitting bears markings of the British Royal Navy, which suggest it came from a 19th-century ship.

“This is truly a historic moment for Canada,” the Prime Minister said. “Franklin’s ships are an important part of Canadian history given that his expeditions, which took place nearly 200 years ago, laid the foundations of Canada’s Arctic sovereignty.”

The Royal Canadian Geographical Society’s chief executive officer, John Geiger, hailed the discovery “one of the two most important undiscovered shipwrecks of the world.”

“The discovery of a Franklin expedition ship raises the possibility that some of the enduring mysteries surrounding the expedition’s destruction can be solved,” Geiger said in a Sept. 8 news release from the society.

“This discovery would not have been possible without their tireless efforts over the years, as well as their commitment, dedication and the perseverance of the many partners and explorers involved,” he said.

“Since 2008, there have been six major Parks Canada-led searches for the lost Franklin Expedition ships, pain-stakingly covering many hundreds of square kilometres of the Arctic seabed,” Harper said.

“It is gratifying that the ship’s remains were found during the government-supported 2014 Victoria Strait Expedition.”