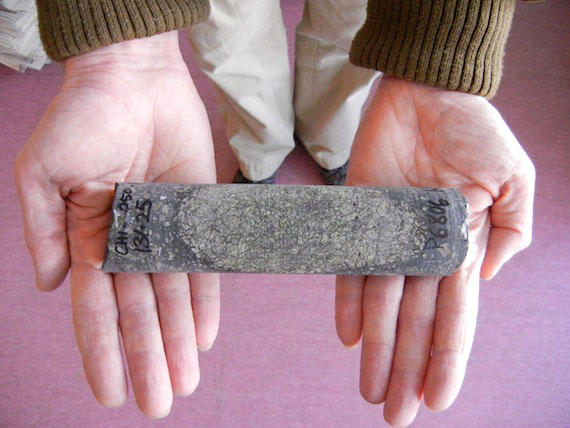 Here’s what a drill section of kimberlite looks like. It’s similar to rock found in kimberlites that Peregrine Diamonds Ltd. has found on its Chidliak property about 120 kilometres northeast of Iqaluit. (FILE PHOTO)

The deal follows the recent statement by BHP that it planned to review its investments in diamonds, saying it would only pursue options that preserve the company’s safety and environmental record, and protect benefits created for local communities.

Preparations for a 2012 bulk sampling program at Chidliak have also been put on hold until a final decision is made next month on whether to proceed, Peregrine said Dec. 20.

To do next year’s planned bulk sampling program (which gives an idea of the marketable potential of a property’s finds), Peregrine had already moved large amounts of equipment, fuel and supplies to Iqaluit on the sealift.

Peregrine maintained last month that BHP was still committed to doing a major bulk sample progam at the site in 2012.

Peregrine said then that the global mining giant’s strategic review would not affect next year’s program at Chidliak.

The new deal, set to be finished by the end of next month, gives Peregrine 100 percent ownership of Chidliak, “exposing its shareholders to all the benefits from the diamond discoveries to date and the project’s exploration potential,” a company news release said Dec. 20.

Under the terms of the agreement, Peregrine will pay a total of $9 million over a period of three years, and will give BHP a two per cent royalty on any future mineral production from Chidliak.

Peregrine has the right to match any offer by a third party to purchase any of the royalty, should BHP decide to sell.

And BHP has agreed to extinguish peregrine’s royalty obligations and BHP’s diamond marketing rights on other Canadian mineral properties in which Peregrine has an interest.

“BHP Billiton’s decision to review its diamonds business has presented Peregrine with an excellent growth opportunity,” said Eric Friedland, chief executive officer of Peregrine. “A 100 percent stake in Chidliak, one of the world’s leading diamond exploration projects, at a time when diamond supply shortfalls are on the horizon and world-wide demand for diamonds continues to grow, offers us complete flexibility on how this project will be developed in order to maximize shareholder value.”

Friedland said BHP’s acceptance of a royalty “speaks volumes about Chidliak’s potential to become a significant royalty-generating diamond mine.”

The acquisition of BHP’s Canadian regional diamond exploration database could “significantly increase our chances of discovering the next new Canadian diamond district,” he said.

“All of us at Peregrine would like to thank BHP Billiton for their substantial investment in Chidliak and for their technical and operational input and faith in Peregrine as operator. We view Chidliak as a shining example of how a major and junior company can work together to add real value to a mineral project. We now look forward to advancing Chidliak to become Baffin Island’s first diamond mine,” Friedland said.

Peregrine started exploration work at Chidliak in 2005. Since then, the company has found 59 kimberlite deposits at the site. Kimberlites, usually found in large conical structures called pipes, often contain diamonds.