Permanent power solution for Pangnirtung on its way: Nunavut government 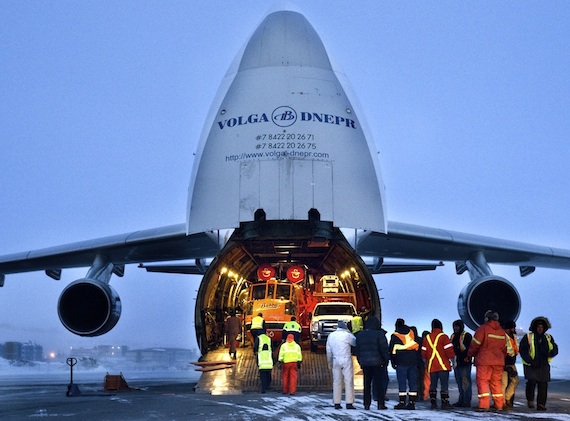 April 13 at the Iqaluit airport, crews unload equipment off an Antonov AN-124-100, a huge heavy-lift aircraft intended for the transportation of heavy and oversized cargo and special-purpose vehicles. The aircraft, chartered from the Russian company, Volga-Dnepr, carried equipment needed to restore full and stable power to the community of Pangnirtung, whose power plant burned down April 3. (PHOTO BY KIERAN OUDSHOORN) Equipment bound for Pangnirtung is lorded on a Sikorsky S-64F Skycrane helicopter April 15 at the Iqaluit airport. (PHOTO BY THOMAS ROHNER)

The local state of emergency in the Baffin community of Pangnirtung has not been lifted but there’s still some good news: new equipment designed to restore full and stable electrical power is on the way.

Four self-contained generator units arrived in Iqaluit on a Boeing 767 this past weekend, the Nunavut government said in an April 15 update.

And an Antonov A-124-100 cargo aircraft then transported a Sikorsky S-64F Skycrane helicopter to Iqaluit on April 13.

The 70-foot-long twin-engine helicopter, capable of carrying up to 20,000 pounds, will be used to transport the generators to Pangnirtung over the next week, weather permitting.

Meanwhile, Pangnirtung remains under a local state of emergency although emergency back-up power was restored April 6.

All schools and GN offices have reopened and local businesses have resumed their regular schedules, the GN said April 15.

Emergency back-up generators are still powering the entire community so residents are advised to conserve any available power until a mid-term power solution is established, the GN advises.

Qulliq Energy Corp. technicians will install the equipment as it arrives in Pangnirtung over the next week, the GN said, which means brief power outages may occur.

“The local state of emergency will remain in effect until the mid-term power solution has been fully implemented in the community,” the GN said.