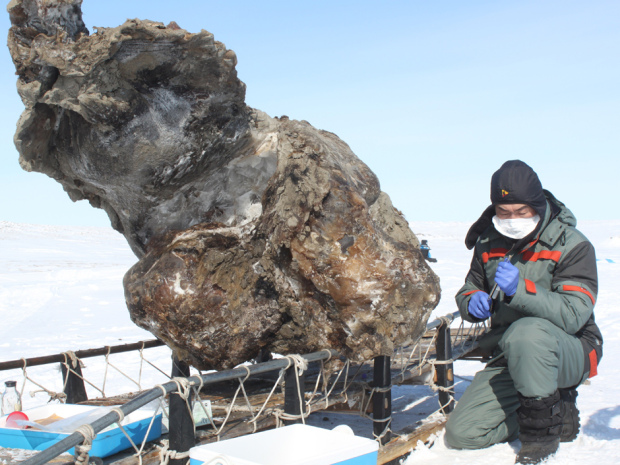 A Russian researcher Northeastern Federal University in Yakutsk works May 13 near a frozen carcass of a female mammoth, found on Lyakhovsky Island off Russia’s Arctic coast. The Russian scientists say they discovered blood in the carcass of the mammoth, thought to have died and then frozen 10,000 to 15,000 years ago, and that this blood might enable them to clone mammoths. “The blood is very dark, it was found in ice cavities below the belly and when we broke these cavities with a poll pick, the blood came running out,” said Semyon Grigoriev, the head of the expedition and chairman of the Museum of Mammoths at the Institute of Applied Ecology of the North at the North Eastern Federal University. “The fragments of muscle tissues, which we’ve found out of the body, have a natural red colour of fresh meat. The reason for such preservation is that the lower part of the body was underlying in pure ice, and the upper part was found in the middle of tundra. We found a trunk separately from the body, which is the worst-preserved part.” The blood of mammoths is thought to have contained some kind of natural anti-freeze to protect its tissue from freezing damage. (PHOTO BY S. GRIGORIEV)