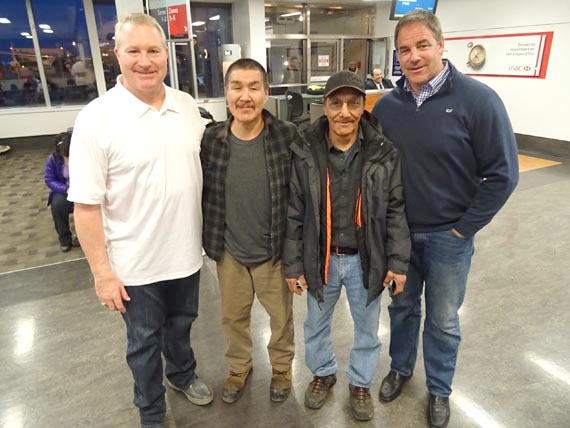 Nunavik hockey fans Tumasi Snowball and Willie Tukkiapik stand with former NHLers Marty McSorley, left, and John Leclair, right, at the Montreal airport March 27. The two hockey stars were accompanying the Stanley Cup to Kuujjuaq this morning, where it will be on display for the first time at the Kuujjuaq forum from 10:00 a.m. until noon. As part of the event, Scotiabank, First Air and Project North will donate 25 hockey bags to Nunavik youth. The cup travels north to Iqaluit later on March 27, where it will be displayed at the Arctic Winter Games arena between 4 p.m. and 6 p.m. Attendance is free. At 6 p.m., a VIP hockey game — tickets required — will start at the AWG arena. On March 28, between 11 a.m. and 3 p.m., children and others will be able to have their photo taken with Lord Stanley’s Cup at the AWG arena. (PHOTO BY JANE GEORGE)