Picking apart the sordid back-story of Nunavik’s first mine 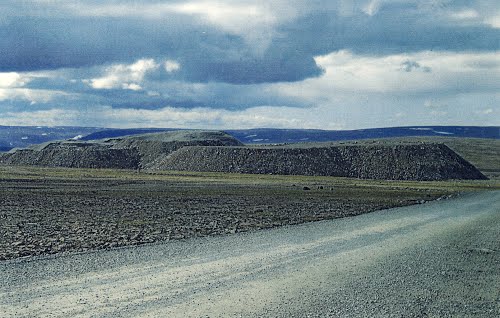 Tailing ponds at the site of the former Asbestos Hill mine, southwest of Salluit, pictured in 2014. (PHOTO BY PETER JOHNSTON) 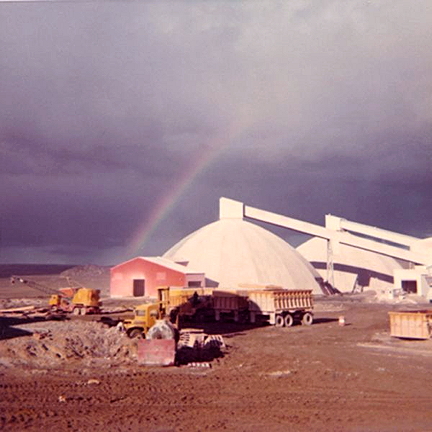 Across a sprawling stretch of tundra south of Nunavik’s Hudson Strait sit the gravel-like remains of the region’s first-ever mine site, Asbestos Hill or Putuniq in Inuttitut, which operated from 1972 to 1984.

For a project that shut down more than 30 years ago, the mine’s mountainous tailings ponds have left a noticeable impact on the land and on the Inuit who live in the region, most of them from the nearby communities of Kangiqsujuaq and Salluit.

Yet what the mine has left behind has also become an integral part of the landscape and life in Nunavik, for better or for worse.

And, although an increasing amount of research focuses on the social impacts of mining on Arctic communities, graduate student Jeanette Carney noted that little had been documented on the impacts of Nunavik’s first mine — second in the Canadian Arctic, after the Rankin Inlet nickel mine.

So Carney, a masters degree student at Memorial University in St. John’s, Nfld., set about interviewing former Asbestos Hill workers and their families, many of whom now work at the two mines currently operating in Nunavik, the Raglan and Nunavik Nickel mines.

And what she’s discovered so far — she has yet to write her thesis — is a legacy with many sore points, but which has led to better conditions for Inuit in today’s mining industry.

That’s where Asbestos Hill has made a real social impact, Carney discovered, through her research: the mine inspired the types of regulations and agreements that are now in place to help Inuit benefit from the mining industry.

When Carney spent the summer of 2015 in Kangiqsujuaq and Salluit, she met a number of former Asbestos Hill workers, all of them men, who in the late 1960s and early 1970s, were freshly graduated from residential schools in the region and looking for work.

Into the 1970s, most of the workers at Asbestos Hill were recruited by family or friends who were already working at the mine.

“That was my first job that I had,” he told Carney in a series of recordings made last summer. “I was only 17.

“When I got there, they told me I had to get up early in the morning,” he said. “No choice about that. My first job was washing dishes.”

For the most part, Inuit employees were labourers when they started, Carney said, and eventually worked their way into more skilled positions, as tradespeople and heavy equipment operators.

Carney documented one story about an Inuk employee sent to British Columbia for training as a mechanic, but she said all the other Inuit she interviewed learned their skills on-site, by watching more skilled employees at work, mostly Quebecers from the Thetford Mines area, known for its huge asbestos mine complex.

“That was helpful when they went back to their communities [where they could] work in those fields,” Carney said.

It’s not clear how many Inuit were employed at Asbestos Hill over the mine’s lifetime. Carney was never able to track down those employment records.

Informed by her research, she believes the mine’s workforce peaked at about 480 employees in the 1970s, but only a small number were Inuit.

Inuit staff worked long and hard hours, recalled Willie Keatainak, who worked at both Asbestos Hill and later at the Raglan mine.

Employees typically worked three months on and one month off — a major shift from the more common two week rotation seen at northern mines today.

Often, Inuit employees chose to stay on at the mine for six months at a time, Keatainak told Carney during an interview.

“It helped us make a lot of money,” Keatainak said, adding he passed a lot of his earnings on to his mother and family.

“We have large families so [it meant that we] could buy a couple of skidoos.”

Many former staffers also recalled the entertainment available to them at the mine site, theatre and dances they wouldn’t have access to in their own communities.

“We were able to have a beer and dance,” Jimmy Angutigirk of Salluit told Carney. “We didn’t get drunk, but after working long hours, a couple cans of beer…”

While those events might have given workers a chance to let loose after long days of work, the bar at Asbestos Hill was a major source of alcohol to Inuit in the nearby communities.

Some In Salluit, who didn’t even work at Asbestos Hill, would go buy alcohol, and sometimes drugs from the mine site, residents said.

“Even when the bar was closed, I heard there was always alcohol, gambling and some prostitution — they even sent prostitutes to the mine,” Aloupa Kulula told Carney. Kulula used to work at Raglan mine; his father was employed at Abestos Hill.

Carney heard unconfirmed stories through her interviews that the Montreal-based Italian mafia had connections with the mine site and affiliates used to deal drugs to staff there.

But worse for many Nunavimmiut were the health and environmental concerns they had about the mine site. That’s because little was known at the time about the dangers of inhaling asbestos fibres.

Yaaka recalled workers using shovels to pick up processed asbestos, and although they were masked, they were covered in asbestos dust all day.

Carney said some families of former workers, who have since died of cancer, fear their deaths may have been related to asbestos exposure, but no formal link has been established.

When the mine finally closed in 1984, most of the workers had already quit, many of them to marry and start families, Carney said.

A decade later Asbestos Hill’s infrastructure still dotted the tundra. The site was finally remediated in the mid-1990s through an agreement struck by the mine’s former owners and Falconbridge Ltd., then owners of the Raglan project.

At the same time, Raglan’s owner has negotiated and signed the first impacts and benefits agreement with Nunavik Inuit for the nickel mine, which went into operation in 1998.

Carney is now in the process of writing her thesis, which should be done by June 2016.