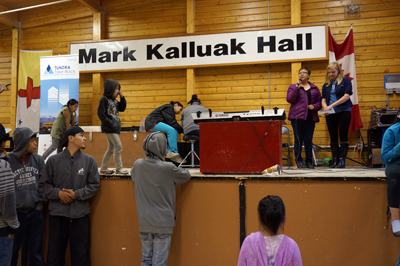 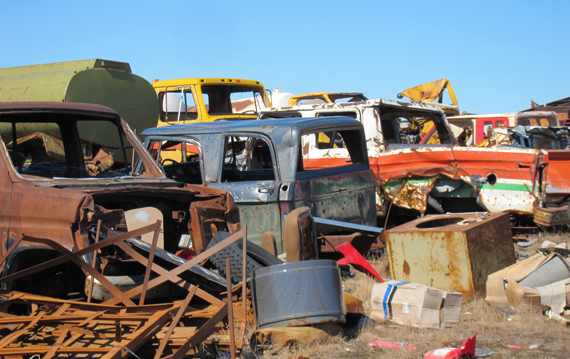 These are some of the old vehicles sitting in the Gjoa Haven landfill that Summerhill Impact hopes to depollute and ship south this summer. (PHOTO COURTESY OF SUMMERHILL IMPACT) 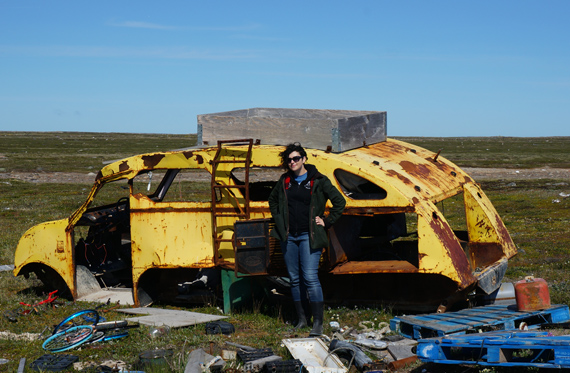 An old snow machine sits at the edge of Arviat’s dump, one of the many vehicles that’s been rusting outside the community for decades. (PHOTO COURTESY OF SUMMERHILL IMPACT)

Once vehicles roll off the sealift and into Nunavut communities, they never roll out again.

But a new recycling project hopes to take back the tundra by removing thousands of kilograms of vehicle waste from the territory this summer.

The Toronto-based not-for-profit environmental group, Summerhill Impact, is working to de-pollute and remove more than 200 cars from two communities chosen to take part in its pilot project this summer.

But the organization found that vehicle recycling was happening in southern centres, and not in the remote and northern regions of the country where it was needed most.

“We recognize that Nunavut is one of the most challenging places to initiative a recycling program because of the distance from major recycling facilities,” said Janet Taylor, account manager for the non-profit group. “So we wanted to prove a point and say, if we can do it here, we can do it anywhere.”

Summerhill Impact is working with a grant from Environment Canada and alongside local partners such as Arctic shipper Nunavut Sealink and Supply Inc. and Arctic Co-ops Ltd, which will recycle car batteries this summer.

The Tundra Take-Back will focus its efforts in Arviat and Gjoa Haven, communities that have already made efforts to improve their waste management.

‘We saw statistics that found that 97 per cent of communities in Nunavut want to make changes to their waste management systems,” Taylor said.

But it’s not always easy.

Gjoa Haven is home to old machinery from the nearby DEW line site that operated in the 1950s and 1960s, equipment that’s proven difficult for the community to remove.

In Arviat, where the hamlet already separates its metal from its solid waste, end-of-life vehicles sit rusting besides homes and in the community’s metal dump.

The hamlet already offers a free pick-up program for residents who want to have old vehicles moved to the dump.

Arviat’s senior administrative officer, Steve England, estimates there are between 500 and 750 old vehicles in the community, from heavy equipment to cars and buses.

“People are happy (about the program) because they know it’s an issue,” he said. “Everyone wants their community clean.”

Summerhill Impact and its partners plan to return to the Hudson Bay community in mid-August and get to work de-polluting vehicles, which means taking out batteries, mercury switches, fuel, others oils and ozone-depleting substances found in air conditioning.

Their goal: to depollute and remove 125 vehicle bodies from each of the two participating communities this year.

Vehicles removed from the community will be shipped to southern recycling facilities by sealift.

And regardless of what communities are able to achieve in 2014, hamlet officials hopes it turns into a longer-term initiative.

England says the hamlet of Arviat is planning to further separate its metals, working alongside a salvage company in Winnipeg.

“Our goal is to eventually get our metal dump under control and stay on top of it,” England said. “And we hope to carry on (with vehicle recycling) next year. Even without the help of Summerhill Impact, it’s something we have to take control of.”