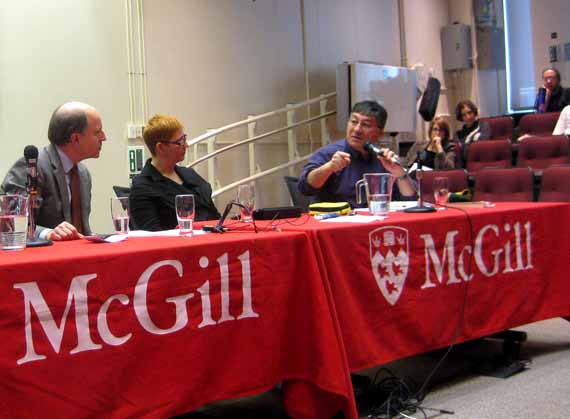 Harry Tulugak, right, speaks to a Feb. 11 conference about the role of Inuit in Quebec’s Plan Nord. The conference, titled Plan Nord: Perspectives, Challenges and Promises for Northern Indigenous Communities, was hosted by McGill University’s faculty of law. (PHOTO BY JOSEPH FLOWERS)

Quebec’s Plan Nord has a “gaping hole” in it, says Harry Tulugak — and that is Nunavik’s inability to gain the riches the plan promises to generate over the next quarter century.

Tulugak, a former negotiator to the Nunavik Regional Government, spoke to a conference hosted at Montreal’s McGill University Feb. 11.

“What is the Plan Nord?” Tulugak said. “If we can say it’s a social economic tool, then… there’s a gaping hole in it, because the local people cannot own land. They cannot use their own homes as collateral, and they cannot borrow against that.”

Tulugak, a well-known dissident of the James Bay and Northern Quebec Agreement, told the conference that one of the biggest blows Nunavik Inuit have faced was surrendering the rights to their land when they signed the 1975 agreement.

“To me, that is one of the most demeaning things that this colonial mindset has ever imposed on any other group of people,” he said. “But unfortunately, we live with it.”

Under its Plan Nord, Quebec is encouraging development across the province’s north that it says will attract $80 billion in private and public investment over the next 25 years – money the government promises will go to benefit all Quebecers.

But while the province has committed to respect treaties and consult with the aboriginal groups who inhabit the province’s north, Tulugak said it’s vital that Nunavik be a full partner in any development on its territory.

“This time around, now that the people of the land are part of the discussion, we are saying that we will not be step-takers anymore,” he said. “We will be involved in each decision, whether it is protection of the environment or resource-sharing.

“I want to see my people prosper and not be mired in a welfare state mentality, which is where we are now in Nunavik.”

Tulugak has recently written to Quebec’s department of natural resources requesting to purchase the land he leases in Puvirnituq, where he is the community’s sole home owner.

Tulugak told the conference he has yet to receive a response.

“This might be a simplistic approach, but there is a challenge out there right now about land ownership,” he said. “This is not just a little landlord (that we’re talking about), we’re looking at control over the 55th parallel.”

Inuit culture is based on sharing with others in need, Tulugak said, describing that as a value that Nunavik society was built on, even as Inuit moved into communities in the 1950s and 1960s.

“But these days, we are losing this fantastic principle that helped us to survive,” he said. “So the sharing of resources — is Quebec willing to do that?

“I’d like to see prosperous communities, not just in money, but in mental and physical health, in all the good things that make healthy communities.”

Colin Scott, an associate professor of anthropology at McGill, spoke alongside Tulugak at the Feb. 11 conference from his own perspective working with James Bay Cree.

Scott says that Plan Nord is quick to highlight the government’s commitments to partner with indigenous groups by respecting treaties and consulting aboriginal groups.

“But if you look at the language, you’ll see that the Plan Nord’s discourse is careful not to raise aboriginal consent as a precondition for development,” Scott said.

Quebec’s aboriginal groups should have a stake in the entrepreneurial, employment and resource-sharing dimension of northern development, Scott said, along with establishing how and which areas of the north are protected from development.

“In development terms, the question of environmental protection looms very large,” he said, “and for indigenous groups, it’s tightly connected to cultural survival.”