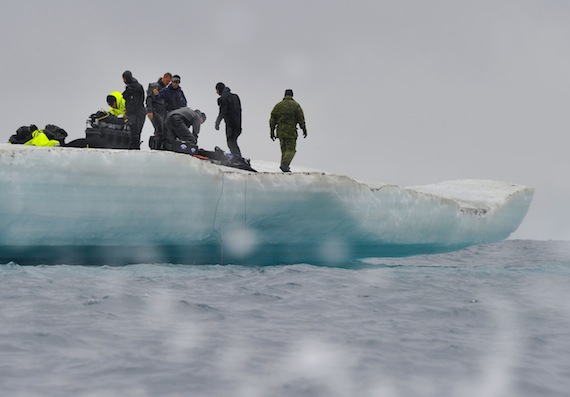 Canadian military divers and United States Coast Guard members wait on an iceberg in Resolute Bay, Nunavut, for the remainder of their team to arrive by a rigid hulled inflatable boat during Op Nanook. (PHOTO BY SGT. NORM MCLEAN/CANADIAN FORCES COMBAT CAMERA/DND) 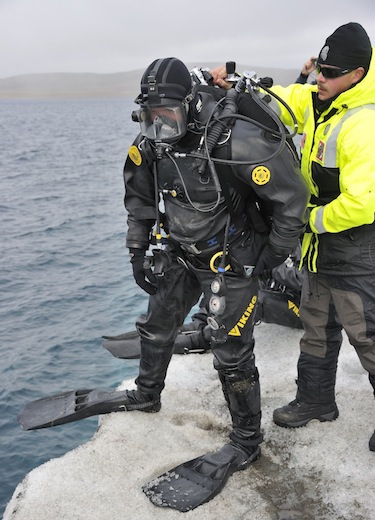 Petty Officer First Class William Roberts, with the United States Coast Guard, helps a fellow American Coast Guard diver prepare to enter the waters off of an iceberg that is being used as a diving platform during Op Nanook. (PHOTO BY SGT. NORM MCLEAN/CANADIAN FORCES COMBAT CAMERA/DND) 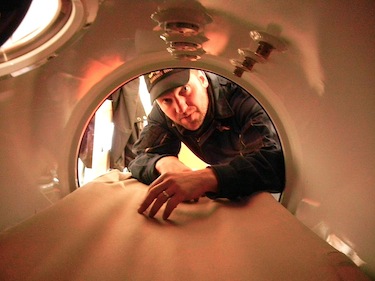 This is a place you hope you don’t have to spend any time in. Leading Seaman Murray Rankin peers into the two-person decompression chamber on the Camp Nanook site in Resolute. If a diver develops the bends from coming to the surface too quickly, he or she will come into this tiny chamber, which looks somewhat like a pressure cooker, and go through a decompression process that can take up to five hours, accompanied by a second person who monitors the diver’s condition. (PHOTO BY JANE GEORGE)

CAMP NANOOK, RESOLUTE BAY — Imagine you’re getting ready to dive into the Arctic Ocean and a piece of your equipment breaks.

You can’t rush to a store, says Cpl. Larry Lyver, one of 23 divers involved in Operation Nanook’s Aug. 4 to 26 military exercises.

Here, if you can’t buy it, you can’t have it, and you have to do without it, he says.

This explains why the diving team arrives with more than enough equipment to do any dives — during Op Nanook this includes navigating around icebergs and raising the sunken wing of a crashed aircraft to the surface.

The divers even have two decompression chambers at Camp Nanook to treat any diver who develops the bends, a potentially life-threatening condition that can occur when a diver returns to the surface too quickly.

An affected diver who doesn’t get treatment quickly enough can die.

So, planning for every contingency is the key to Op Nanook, said Lyver.

Diving in Arctic waters — at least in summer — isn’t markedly different than diving elsewhere, he said.

And it’s safer here, for example, than in Afghanistan, where there can be underwater mines to clear.

But Op Nanook “logistics is a monumental task,” Lyver said, as he talks in a large inflatable tent that’s decked with drying divers’ suits and other equipment.

When the divers return from Op Nanook they’ll go over the successes and shortfalls of the exercise and make lots of lists, so those involved in future Arctic exercises “can be ready instead of learning the same lessons.”

More than defending sovereignty, planning and execution appears to be a major focus of Op Nanook “ to demonstrate our ability to operate effectively in the challenging environment of Canada’s North,” as a backgrounder says.

In Op Nanook’s operations room, you can find more than a dozen logistics staff from all branches of the armed forces, the Coast Guard, and Rangers hunched over computers and telephones.

Others look a giant spreadsheet of everything that’s going on at any time — where the various groups of the military, such as what the 27-member Arctic Response Company, are doing and where the many aircraft are.

That spreadsheet is laid out on a pool table in the usual games room of the Polar Continental Shelf Project residence, against a background of maps and pointed cues up on the wall.

Despite the detailed planning, everything is always changing and shifting, like the weather outside which goes from snow-like precipitation to rolls of fog and then some sun in the source of a day.

Communications and transportation snafus can still cobble the best-laid plans.

The lack of cell phone service in Resolute Bay means people scramble to connect and try to keep a timetable. Rescheduling can take hours.

Sometimes the internet goes down, doubling the problems.

Then there’s the difficulty of relying on any flight schedules due to the changing weather and mechanical breakdowns.

These have caused delays for the Griffon helicopters, creeping their way north, and for aircraft carrying General Walter Natynczyk, the chief of the defence staff of the Canadian Forces, to Camp Nanook, which ended up spending the night of Aug. 16 in Iqaluit instead of at Camp Nanook.

There’s also the question of ground transportation — about 15 vehicles for the entire camp, whose population is expected to swell to more than 500 this week.

The importance of proper planning crops up in discussions with people in the community of Resolute Bay, too.

This past spring, the airport ran out of fuel for aircraft, because an order placed for fuel by the Government of Nunavut ran out.

This meant costly loads of fuel had to be shipped up, taking up payload space on aircraft used for food and other items.

A lack of planning also saw empty shelves on the Resolute Bay co-op store’s shelves earlier this month when it turned out the former co-op manager, who left on vacation and never returned, hadn’t placed any food orders.

Now the co-op shelves are well-stocked.

But that’s that kind of situation, which the organizers of Op Nanook, who spent a year planning, want to avoid.