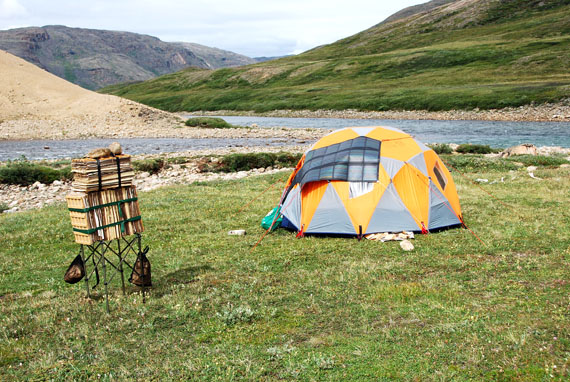 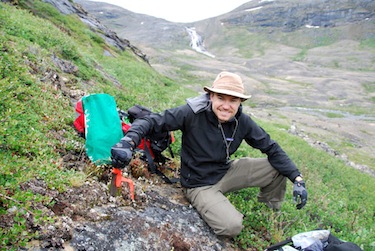 Jeff Saarela collects a grass on a rocky slope near Mount Joy in the Soper River area between Iqaluit and Kimmirut. (PHOTO BY PAUL SOKOLOFF)

There were no char to eat and the mosquitoes were unrelenting, but Dr. Jeff Saarela’s trip down the Soper River this past July to collect Arctic plants for the Canadian Museum of Nature was letter perfect.

Saarela, along with three colleagues from the museum, spent three weeks on the heritage river, and in Kimmirut, digging up plants to gain a better understanding of what’s growing on South Baffin.

And they found a few things they didn’t expect, like a lovely species called the northern bog orchid.

“It was, like, ‘Wow!’ It’s just never been collected in the Arctic in the past,” said Saarela, with the zeal only a plant-loving botanist can muster. “The key is, you really have to explore and move around. You can go over a hill and on the other side, see something completely different. You never know what you might find.”

Saarela, along with veteran museum botanist Lynn Gillespie and assistants Paul Sokoloff and Roger Bull, are hoping to compile a snapshot in time of Arctic plants as part of a five-year, Arctic Flora of Canada and Alaska project.

They hope this comprehensive plant inventory will help future generations understand a pivotal point in the Arctic’s ecological evolution by documenting the appearance of new species and the range of native ones.

The team spent the better part of July camping along the Soper and floating down the river in inflatable canoes supplied by Iqaluit’s Inukpak Outfitting. Two of the canoes were connected catamaran-style by a wooden platform which worked perfectly to carry gear and specimens, Saarela said.

They had hoped to fish for char along the way but learned upon arrival that the fish run earlier in the spring. And a couple of team members, mistakenly anticipating late-night sunlight, didn’t bring headlamps.

But from a purely scientific point of view, the trip was a huge success, Saarela said.

The team brought home about 900 plant collections which will be transformed into roughly 3,500 herbarium sheets — plant specimens pressed, dried and mounted on sheets — and placed in the museum’s herbarium and shared with other herbaria around the world.

Those collections include that frail bog orchid but also some grasses and ferns never before found in the Arctic and other species not common to Baffin Island which suggests southern plants are increasing their northern range.

He noticed one striking and recent example however in Iqaluit and Kimmirut—a fetching southern bunchgrass called foxtail barley that contains a wispy pale yellow head when mature.

He suspects other weed seeds have made their way to the Arctic in the past but have not spread because of the unfavourable climate, soil and other conditions.

“But as the climate warms up, the conditions might change and more southern species might end up in the Arctic, like the foxtail barley,” Saarela said.

He said he enjoyed exploring the stands of willow trees that grow three to four metres high in the Soper’s protective microclimate. “You stand inside them and it’s like a little forest. It doesn’t feel like you’re in the Arctic.”

The river valley, of course, was its own attraction.

“The Soper River has unbelievable waterfalls. It drains much of the Meta Incognita peninsula so it’s a deep valley carved through millennia and some of those waterfalls are magnificent,” Saarela said.

“It was absolutely beautiful, travelling down the Soper River in the sunshine.”

He and his colleagues will spend the next few months sorting, identifying and processing their plant collections and then they’ll write a journal article summarizing their findings.

“Then botanists in 20 years time and beyond will know what’s out there. That’s how we come to know changing biodiversity.”

Saarela hopes to organize another Arctic research trip in 2014, possibly to the Kivalliq mainland, west of Arviat, along the now fluctuating tree line. “If plants are shifting their range,” he said, “that’s where we’d see it first.” 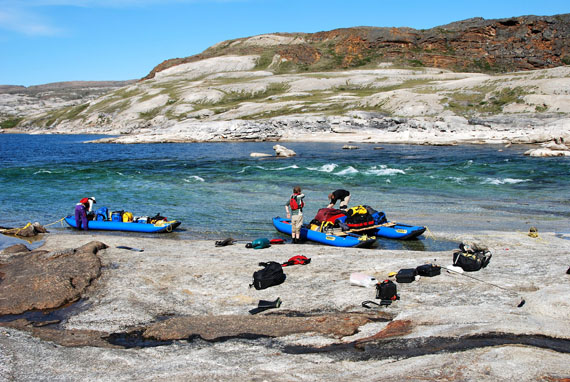 Jeff Saarela’s botany team loads their inflatable canoes onto Soper Lake, just below Soper Falls in the area between Kimmirut and Iqaluit. (PHOTO BY JEFF SAARELA)