One bear digs into burial plot at Arviat cemetery 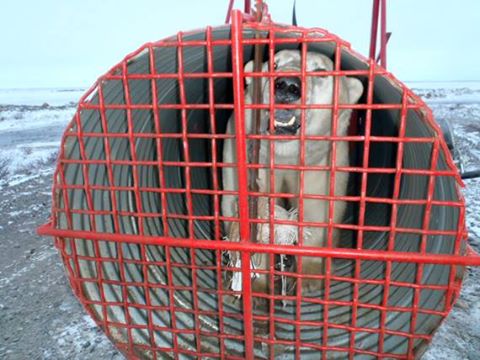 An Arviat wildlife officer has set up two of these polar bear traps east of the community, but the traps have yet to draw any bears this year. (FILE PHOTO 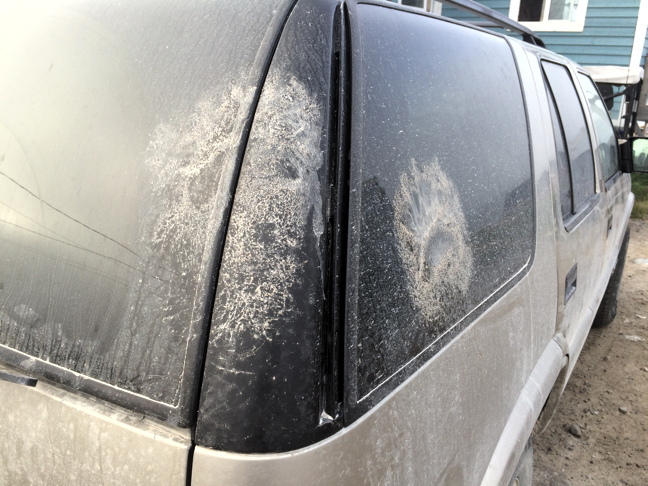 Polar bear prints seen on the side of a parked car Aug. 15 in Arviat, where residents are reported more and earlier sightings of the bears than usual. (FILE PHOTO)

The polar bears have arrived early in Arviat this year, prompting the Nunavut hamlet and local wildlife department to step up protection measures for the Kivalliq community of 3,000.

Polar bears typically begin their migration from southern Hudson Bay north along the Kivalliq coast in the early fall.

But through the month of August, residents have reported a number of run-ins with bears.

Earlier this month, hamlet officials got a call about a grisly disturbance just outside the community — a polar bear had dug up part of Arviat’s cemetery.

“They have disturbed the gravesite before,” said Michael Cohen, the hamlet’s acting senior administrative office. “In this case, one got a little further into it. The bear reached the coffin, and there was an exposed body part.”

Officials weren’t made aware of the incident until the polar bear had already left the area. Cohen said he issued a work order to have the gravesite covered and re-landscaped.

But it prompted the hamlet to bring in its polar bear monitor a month early.

Using rubber bullets and bear bangers to scare polar bears off, Leo Ikakhik usually starts his nightly patrols of the community in mid-September through the autumn and early winter.

And now the Government of Nunavut has also hired a second night guard to patrol Arviat’s streets, working out of the GN’s local wildlife office.

Between the two monitors’ evening and early morning shifts, and Arviat’s wildlife officer, Joe Savikataaq Jr.’s daytime hours, residents now have someone they can call 24 hours a day to report polar bear sightings.

“The calls have increased and have been more than normal for this time of year,” said Savikataaq.

“Normally we see that increase in October and November.”

Savikataaq couldn’t say what is drawing the bears so early in the year; he said it doesn’t appear to be related to weather or ice conditions.

A few years ago, Savikataaq designed a polar bear trap: a large cylinder, like a culvert pipe, laden with meat. Once the bear walks into it, a metal gate falls to lock the animal in.

The trap is stationed on a trailer, so wildlife officers can drive the captured animal north of the community to release it.

The traps have yet to catch any bears this year, though.

Savikataaq also plans to set up luring stations outside the community; essentially meat caches designed to satisfy a bear’s hunger and deter it from coming closer to town.

Fortunately, no one has been injured by any polar bears and residents have not had to resort to any defence kills so far this season.

The Nunavut Wildlife Management Board had recommended last year that the Government of Nunavut raise the total allowable take of western Hudson Bay polar bears for Kivalliq hunters from 24 to 38.

In the end, the GN only opted to raise the quota by four, to 28 polar bears.