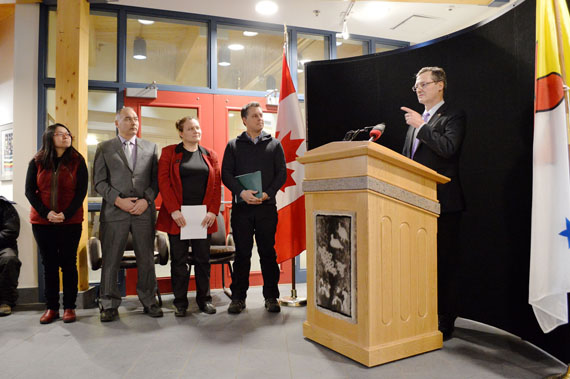 Nunavut Justice Minister Keith Peterson speaks at an announcement event in the atrium of Nunavut’s legislature Feb. 1, when federal and territorial politicians confirmed funding for the Qikiqtani Correctional Healing Facility. When it’s completed by 2020, the new $75.8-million jail in Iqaluit will replace the decrepit, scandal-ridden Baffin Correctional Centre. (PHOTO BY STEVE DUCHARME)

Speaking in front of a packed lobby in Nunavut’s legislative assembly, territorial and federal politicians confirmed Feb. 1 in Iqaluit that they’ve secured the millions of dollars necessary to bring the territory’s correctional facilities into the modern era.

The project will end Nunavut’s reliance on the 30-year-old BCC building, which Howard Saper, the former federal correctional investigator, slammed for multiple human rights violations in a report that the Government of Nunavut suppressed for a year before releasing it in 2014.

The Auditor General of Canada also criticized BCC for its “critical deficiencies” in 2015.

“The centre will resolve many of the issues noted by the Office of the Auditor General and Office of the Correctional Investigator [2013 report],” Nunavut Justice Minister, Keith Peterson, said in brief statement, flanked by Community and Government Services Minister Joe Savikataaq, the parliamentary secretary for youth, Peter Schiefke, and Iqaluit Mayor Madeleine Redfern.

Ottawa will do most of the heavy lifting related to the facility’s $75.8 million price tag, contributing more than $56.6 million from its Small Communities Fund.

“The investment in the Qikiqtani Correctional Healing Centre will increase public safety and help to ensure the safe and successful re-integration of offenders into communities,” Schiefke said.

Money for the new corrections centre had previously been revealed in October 2016, during committee reviews of capital projects within the Government of Nunavut’s 2017-18 capital budget

Construction on the project is scheduled to start in July 2018, beginning with the completion of a two-story maximum-security unit adjacent to the BCC.

“The new centre will also allow for the territorial sentencing of Nunavummiut to serve their sentence within the territory rather than in the provinces or another territory,” Peterson said.

Both facilities—with a total capacity of 112 beds—will offer inmates “culturally appropriate service and skills training,” says the release, drafted according to a curriculum approved by an elders advisory committee.

“We’re still going to be working in the next couple years planning and working with elders and other specialists in justice and the health department to develop programs [for the facility],” Peterson told Nunatsiaq News shortly after the announcement.

Once completed, the facility will complement the already completed Makigiarvik minimum-security prison, as well as the nearby youth and women’s prisons.

The final name for the Qikiqtani Correctional Healing Centre has yet to be decided, Peterson added.

“We’re going to consult with the community, come up with a proper name,” he said.

Peterson, who had his first tour as Nunavut’s justice minister in 2009, said he was “shocked” at the time by the conditions at the Baffin Correctional Centre.