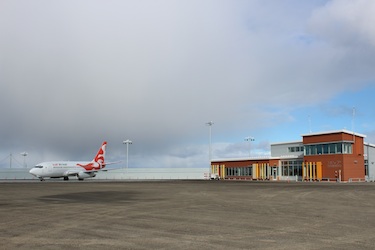 Transport Canada has denied a request from the Kativik Regional Government to install a CATSA screening station in the newly-upgraded Puvirnituq airport, pictured here. (FILE PHOTO)

KUUJJUAQ — The Kativik Regional Government wants to make travel easier for passengers taking off from the Puvirnituq airport.

“That is common practice in… airports that do not have screening services across Canada.”

But during the construction of Puvirnituq’s new airport terminal, which was inaugurated earlier this year, the building was designed to house a screening centre, explained Natalie Jobin, director of the KRG’s transport department.

One of the motivating factors behind that was to make travel smoother for elders and patients travelling south from Puvirnituq for care — a group that must currently disembark for screening at La Grande, en route to Montreal.

As home to the Inuulitsivik health centre, Puvirnituq is the medical hub for Nunavik’s Hudson coast communities, making it the base for many medical travel trips to the South.

“In her letter, the minister [Lisa Raitt] states that passengers travelling for urgent medical reasons are not required to transfer through another airport to be screened,” Jobin said.

“But regular people who have to go to Montreal for exams and X-rays who travel on a wheelchair or stretcher have to deboard in La Grande and be rescreened.”

The need to re-plane elders and patients is not ideal, Jobin said — a northern reality that may have been missed by southern bureaucrats.

The KRG has since sent a letter of reply to Transport Canada “clarifying the needs of the communities.”

For its part, Transport Canada told Nunatsiaq News the department is in the process of “looking at the overall designation approach for airports.”

Jobin was not aware of the cost of installing the screening station in Puvirnituq, but said when in operation, it would have to be staffed by four CATSA employees.

Currently, Kuujjuaq and Kuujjuaraapik are the only airports in Nunavik with a CATSA screening station.

Between 2009 and 2012, the federal and provincial governments spent more than $45 million on upgrades at the Puvirnituq airport to extend the runway to 6,300 feet, enlarge the aircraft apron, construct a new garage and a new air terminal building.

As a result of a longer runway, the Puvirnituq airport can now accommodate large capacity jets, such as Air Inuit’s Boeing 737-200C aircraft.

The landing strip extension also provides better access in poor weather conditions for the Challenger medical evacuation aircraft used by the Quebec government’s air service when patients need to be flown from the Inuulitsivik health centre to Montreal.

While it’s still waiting on a screening station, the Puvirnituq airport now has an automated weather observation system, recently installed by NAV Canada, which should in operation by 2014.

The KRG is also in the process of setting up free wireless internet in all Nunavik airports.