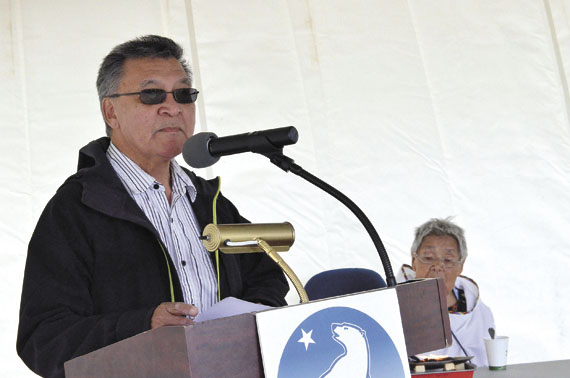 Tom Sammurtok, then the minister of CGS, at the launch of construction for the new Iqaluit airport last summer, when he promised jobs galore for Inuit on the project. Premier Peter Taptuna has removed all of Sammurtok’s cabinet responsibilities following the laying of drunk driving charges against the MLA this past April 13. (FILE PHOTO)

Nunavut Premier Peter Taptuna has removed Tom Sammurtok, the MLA for Rankin Inlet North-Chesterfield Inlet, from all cabinet responsibilities, after the MLA was charged with impaired driving and operating a motor vehicle under the influence of alcohol.

Johnny Mike, the MLA for Pangnirtung, will take over all of Sammurtok’s cabinet duties, including the Community and Government Services portfolio.

Police laid the charges against Sammurtok on April 13.

“I will not make any excuses or place the blame elsewhere, as I am fully responsible for my actions,” Sammurtok said in a statement.

Sammurtok said he is scheduled to appear before the Nunavut court of Justice on May 21 to face the charges.

“When the legislative assembly reconvenes in May for our spring sitting, I will accept whatever discipline my colleagues deem appropriate,” he said.

Until the charges are dealt with in court, Sammurtok will sit as a minister without portfolio, Taptuna said in a statement.

That’s because, under Nunavut’s system of cabinet selection, only MLAs, and not the premier, are able to remove a member from cabinet.

The assembly’s spring sitting starts May 25 — that’s when MLAs would be expected to impose their own discipline on Sammurtok.

Sammurtok was elected to the Nunavut legislative assembly on Oct. 28, 2013, when, with 212 votes, he defeated three other candidates — Donna Adams, Qilak Kusugak and Harry Niakrok — to win the new seat of Rankin Inlet North-Chesterfield Inlet.

In his statement, he said he is now seeking professional help.

“I realize that I made a mistake and it is not acceptable to put myself or others at risk. I deeply regret my actions, and I am immediately taking steps to seek help and healing from professionals,” Sammurtok said.

Describing his transgression as a “breach of trust” Sammurtok apologized to his family, his colleagues and all Nunavummiut.

“I realize that a breach of trust is a hard thing to overcome and as an MLA I will do whatever it takes to rebuild the trust,” he said.