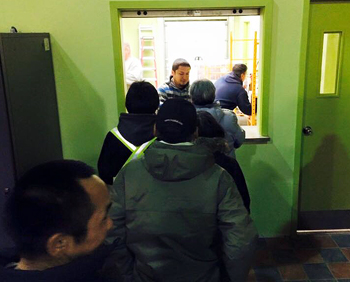 Nunavimmiut line up Oct. 15 for a chance to purchase wine or beer from Puvirnituq’s co-op store, the second in Nunavik to launch alcohol sales. (PHOTO COURTESY OF MUNCY NOVALINGA)

Residents of Puvirnituq crowded the Nunavik community’s co-op store Oct. 15, some waiting for more than a half an hour for a chance to buy cold beer or wine.

Customers in both communities can buy a 12-pack of brands such as Budweiser, Labatt Blue, Molson Dry and Coors Light, or one-litre cartons of red and white wine.

Puvirniturmiut flocked to their co-op store Oct. 15; at one point shoppers said there were four long lines leading to the sales counter.

But residents say the community was quiet that evening, with no alcohol-related calls to the police or health centre.

The co-op’s decision to offer beer and wine sales comes three years after its members voted in a 2012 municipal referendum to lift alcohol restrictions in the Hudson Bay community of 1,700.

Many residents hope and believe that easier access to low-percentage alcoholic beverages like wine and beer will help cut down on bootlegging of hard liquor in the community.

In recent years, Nunavik police have noted that Puvirnituq has become a central distribution point for bootlegged alcohol destined for other communities in the region, given its jet service connection with Montreal.

Although local sales have only just begun, Puvirnituq mayor Levi Amarualik said the Northern Village (similar to a Hamlet in Nunavut) supports the initiative.

It’s difficult to gauge the impact local beer and wine sales have had on Nunavik’s largest community of Kuujjuaq. In a region that is home to high rates of alcohol-fueled crime and violence, the Kativik Regional Police Force says the crime rate in Kuujjuaq has remained the same despite residents having local access to beer and wine.