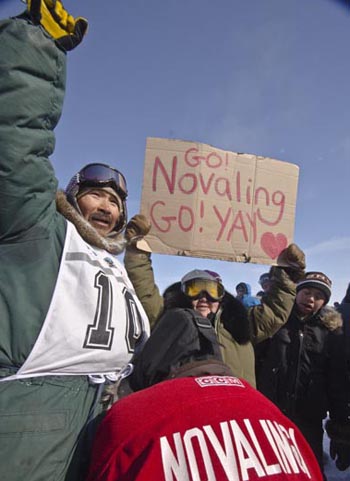 Novalinga Novalinga celebrates his win at the finish line in Puvirnituq March 26. (PHOTO BY PIERRE DUNNIGAN/IVAKKAK) 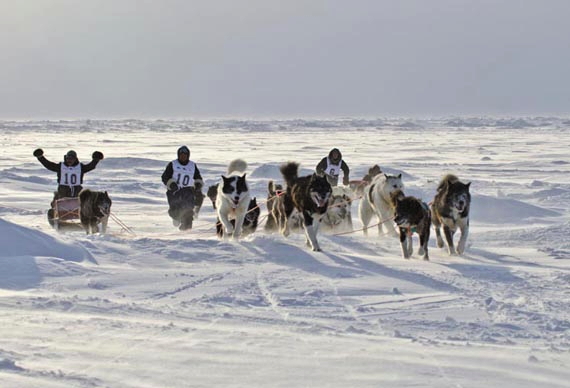 The community hosting the finish line of this year’s Ivakkak dog sled race got to welcome home their local mushers, who finished in the race’s top three places March 26.

According to preliminary results, Puvirnituq musher Novalinga Novalinga and partner Juani Uqaituq finished in first place March 26, holding onto a lead from day one of the race. This marks Novalinga’s second win; he and partner Aibilie Moses won Ivakkak in 2009.

Veteran musher Harry Okpik and partner Gary-Joe Angnatuk finished fourth overall, although they were the first team to cross the finish line March 26.

Race officials will confirm those numbers at an evening meeting, once penalties are applied to mushers’ overall scores, said race coordinator Juani Beaulne.

But all 10 participating teams made it past the finish line March 26 without incident, Beaulne said.

“It was beautiful,” he said. “It was a pretty good race. Everyone was fast this year — they did short days.”

That, Beaulne said, was in part to colder than usual temperatures, which kept the trail hard and smooth for teams to teams to run on.

“The snow was nice and hard all the way,” said Beaulne, who drove the race trail twice by snowmobile; from Puvirnituq to the starting line in Kuujjuaraapik, and then back to Puvirnituq.

There were no major injuries or incidents, except for one dog team losing its qamutik on day two of the race.

Musher Willie Cain was in third place when his qamutik hit a patch of rough ice, flipped and broke into pieces, forcing the Ivakkak support crew to transport the mushers and dogs on to the next community.

Cain faced a penalty that ended up costing him his top spot in the race, Beaulne said.

Ivakkak left Kuujjuaraapik March 17 — one day later than planned due to poor weather, and teams sat out once more due to weather March 19.

Otherwise, conditions remained clear for the rest of the race, Beaulne said, with mushers finishing their daily legs before the sun went down.

Mushers and dog teams arrived in Puvirnituq in the midst of this year’s snow festival. Ivakkak teams are expected to attend a community feast March 28, where officials will hand out awards to participating teams.