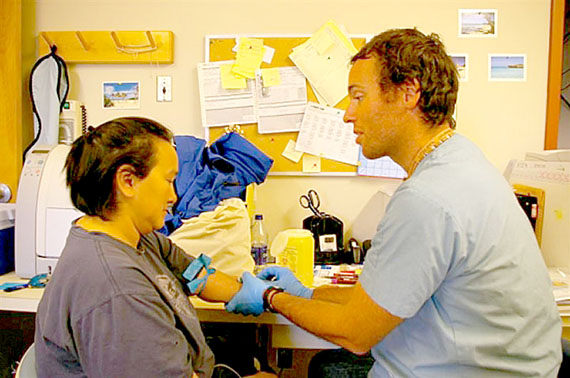 A health worker attends to a Kugkuktuk woman during the 2008 leg of the Inuit health survey. (FILE PHOTO)

Of all the highly-touted Arctic research projects the federal government funded during the 2007-08 International Polar Year spending spree, there’s one that touched more Inuit lives than any other: the Qanuippitali Inuit health survey.

This nearly forgotten project used at least $10.6 million worth of public money and directly involved thousands of adults and children — about 12 per cent of Inuit living in Nunavut, Nunatsiavut and the Inuvialuit region.

But despite all the hype and good intentions (see video embedded below) this scheme ended up as an expensive dud.

Using the icebreaker Amundsen as a floating health lab under a lease agreement, researchers in 2007 called at every community in the Baffin and Kivalliq regions, making contact with 375 children under the age of five and 1,296 adults.

In 2008, they did similar work in Nunatsiavut and the Kitikmeot and Inuvialuit regions and reached comparable numbers of people.

They performed physical examinations and took blood, hair and other samples from more than 2,300 adults. They administered questionnaires on a wide variety of subjects, including mental health, diet, suicide, substance abuse and the well-being of communities. They did a separate study that looked at the health of hundreds of Inuit children, testing them for sight, hearing, nutritional deficiencies and much more.

This work was virtually identical to an earlier project that covered Nunavik only: the Qanuippitaa survey of 2004, also done by researchers working aboard the Amundsen.

In that one, the Quebec government’s Institute of Public Health did what they were supposed to do. They compiled the data in a form accessible to the public. In 2007, they issued a comprehensive public report that any member of the public may read.

But in the Nunavut, Nunatsiavut and Inuvialuit study, this never happened.

After two summers of work, $10.6 million in federal spending and a ton of hype, there’s no credible comprehensive compilation of the study’s results and no credible public report. Five years after its completion, much of Qanuippitali’s precious data sits unused and unread.

This is unacceptable. The designers of the Qanuippitali Inuit health survey sought to take an accurate one-time snapshot that would reveal the real state of Inuit health across the Arctic. But this snapshot never emerged.

And the parts that have emerged were never adequately distributed. Health workers, legislators, government administrators, educators, police, social workers, Inuit organizations, volunteers and regular people still have little or no access to the vital information contained in that survey.

It’s true that some bits of data from the Inuit health survey ended up in the public domain. In 2009, papers presented at the International Congress on Circumpolar Health in Yellowknife reported serious malnutrition among Nunavut families. One such finding was that seven in 10 Nunavut families went hungry for at least part of the year during which were surveyed.

But the only reason you know it is that a Nunatsiaq News reporter happened to be sitting in the room when academics presented those papers.

And mounds of data related to serious public issues in Arctic still sit buried, or as good as buried.

Take mental health, for example, an issue that makes the news frequently these days. Due to a rash of dangerous firearms incidents, growing numbers of people in Nunavut are raising mental health as a public issue.

But few people are aware that in 2007 and 2008, the Qanuippitali team administered a 15-page questionnaire called “Community and Personal Wellness.” Most of that questionnaire was related directly to mental health. (See document embedded at bottom of page.)

In it, the surveyors, in confidential interviews, asked numerous questions about emotional well-being, suicide, violence, sexual abuse, gambling, and frequency of alcohol and illegal drug use.

Another example is poverty. Last year, the Government of Nunavut devised a strategy that claims to be aimed at reducing poverty.

But it’s likely that no one at the GN or its partners ever looked at data from another questionnaire that Qanuippitali surveyors also administered. In it, they gathered information about weekly household expenditures on rent, food, fuel and so on, related to questions about family food shortages. Obviously, this data is related to poverty.

But the results are buried near the bottom of a skimpy final report document issued in May 2010. It’s actually available from the Inuit health survey website, but it’s so well-hidden only an experienced data-miner could possibly find it.

This too, is inexcusable.

Part of the problem, perhaps, is the unwieldy collection of organizations that oversaw the Inuit health survey: the Nunavut Association of Municipalities, Nunavut Tunngavik Inc., GN, and organizations from Labrador and the Beaufort Sea-Delta regions.

We know the NAM, which handled relations with Nunavut communities, imploded not long after the survey’s completion and to this day survives only in a dysfunctional state.

As for the GN and Nunavut Tunngavik Inc., who knows? The GN’s incapacity is now the stuff of legend. The survey was headquartered at the Centre for Indigenous Peoples’ Nutrition and Environment on the West Island of Montreal, which may explain why only nutrition-related data has seen the light of day.

It’s clear, though, that planners designed no credible plan for communicating the Inuit health survey’s results to the public.

At same time, some researchers with access to the data — financed, let’s not forget, with public money — are putting it to essentially private uses, especially the production of career-enhancing academic papers that nobody reads.

How ironic. In recent weeks, numerous people have whined at length about the wounds that the big bad Conservative government inflicted this past March on an array of Inuit and other aboriginal organizations, in cuts and reductions to health promotion and health research handouts.

Unfortunately, the Qanuippitali fiasco reveals that much of that howling is just ritualistic noise. If entities like ITK, NTI, GN and Pauktuutiit really cared about using good research to help fix Arctic health problems, they would have used their influence to ensure the fiasco never happened in the first place. JB