Inuit firm will hire more than 100 workers for job 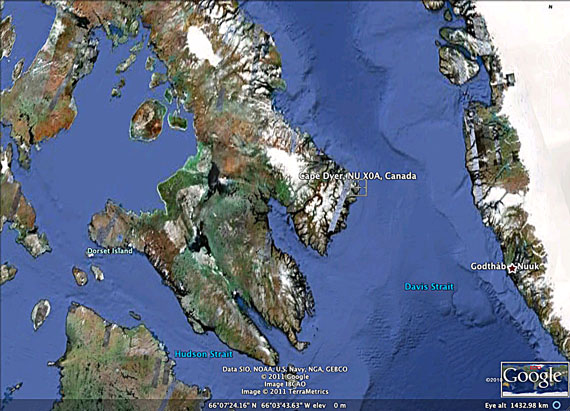 The Inuit-owned Qikiqtaaluk Logistics Inc. will start a big cleanup contract at Cape Dyer, south-east of Qikiqtarjuaq, this summer and finish the work by 2013. (GOOGLE EARTH IMAGE)

Qikiqtaaluk Logistics plans to hire more than 100 workers for the project, QL president Harry Flaherty said in the release.

Cape Dyer is located on the east coast of Baffin Island, southeast of Qikiqtarjuaq, so the communities most affected by the project are Qikiqtarjuaq, Pangnirtung and Clyde River.

And QL will give priority to the training of workers in things like cooking, kitchen management, transportation of dangerous goods, hazardous material removal, and First Aid, the press release said.

The Cape Dyer radar site was built in the mid-1950s as part of DEW line network of radar stations created during the Cold War to detect long-distance bombers from the Soviet Union.

The site shut down in 1989, one of 21 other DEW line stations that were decommissioned to make way for the North Warning System in 1993. Another 21 DEW line stations had already been closed in the early 1960s.

Since the mid-1990s, the Department of National Defence has been cleaning up these abandoned sites, many of which are covered with hazardous and environmentally dangerous materials such as asbestos, PCB, lead, paint-thinner and hydrocarbons.

Military engineers and the giant contracting firm SNC-Lavalin performed early cleanup work at the site, but now, Qikiqtaaluk Logistics have been given full responsibility for finishing the job.

This is the first time that a wholly-owned Inuit firm has been made the prime contractor for such a remediation project, the press release said.

“Securing this project with DCC [Defence Construction Canada] shows that the capacity that we have built through other major remediation projects in Nunavut provided the bonding company and DCC with the confidence they need to give the job to a wholly-owned Nunavut firm,” Flaherty said in the press release.

The value of the contract is not disclosed. Work on it is likely to be completed by 2013.