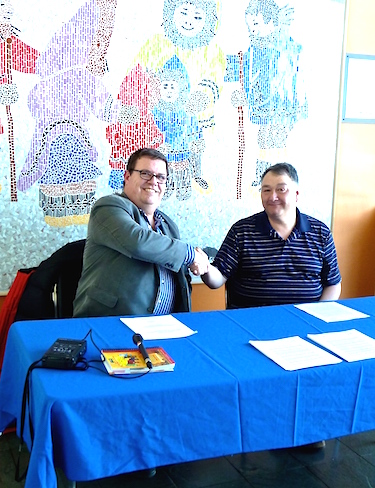 Ungava MNA Jean Boucher shakes hands with Nunavik Tourism Associations’s executive director Allen Gordon March 10 in Kuujjuaq after the two finalized a deal which will give the NTA new money for marketing and promotion. (PHOTO BY ISABELLE DUBOIS, COURTESY OF THE NTA)

The Quebec government will earmark an additional $426,000 which will be used promote Nunavik as a tourism destination, Jean Boucher, the MNA for Ungava, announced March 10 in Kuujjuaq.

The Nunavik Tourism Association will receive the money for promotional and marketing activities in 2015–2017, Boucher said.

The NTA and regional partners have already developed a 2015 to 2017 promotional and marketing plan, which has identified stakeholders, priorities and target markets, including the United Kingdom, the United States, Canada and France, said a Quebec government news release about the announcement.

“The funding will contribute to increasing awareness of our beautiful vast expanses. The promotion and marketing project for our destination will attract tourists from all over. Nunavik’s economic development potential is more than interesting, and depends without question on welcoming tourists from Canada and abroad,” said Boucher in the release.

“This concerted promotional offensive will enable the region to hold press activities and be represented at trade shows, fairs and missions. It will also contribute to developing partnerships with tour operators. Knowing that these initiatives will be implemented with respect for the land, and with the support of the community of Nunavik, which will benefit from the impacts, including Inuit job creation, is great news,” said Quebec’s Aboriginal affairs minister, Geoff Kelley, in the release

And Quebec’s energy minister Pierre Arcand, who is also responsible for Plan Nord, Quebec’s plan to develop the northern part of the province, said “international competition is fierce, especially with the emergence of new destinations. We are confident that we can offer tourists the authentic and original experiences they are seeking.”