“Here’s the problem. So where are we going to go from here?” 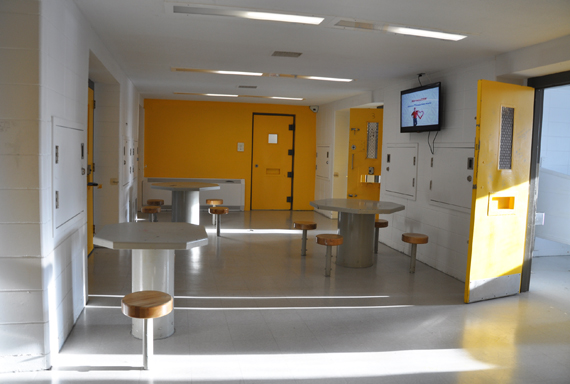 A view into the Kativik Regional Police Force’s holding cell area at its Kuujjuaq station, the largest in the region. (PHOTO BY SARAH ROGERS)

And that’s the responsibility of a number of partners, in both Nunavik and Quebec City, said KRG chair Jennifer Munick (Watkins).

“I was really grateful that [the report has] come out, because it’s an ongoing issue,” Munick said of the ombudsman’s Feb. 18 report, which raised issues around sanitation, safety and confinement in Nunavik’s holding cells, along with the grueling travel endured by offenders.

“It’s been an ongoing issue for a long time. But I feel like [this report] is to our own advantage.”

The report, first seen by KRG officials in January, documented extensive overcrowding in police station holding cells, the only facility where offenders awaiting trial can be held in the region before they are transferred south to bail hearings or correctional facilities.

And it shouldn’t come as a surprise; those specific problems with Nunavik’s justice system were laid out last year in Nunavik’s Parnasimautik report, the region’s blueprint for future development.

Parnasimautik was presented to Quebec government ministers last summer, followed by a visit by a handful of ministers — Quebec’s justice minister among them — to Nunavik in the fall.

“So it’s nothing new to them,” Munick said.

If anything, the report is a renewed call to sit down with justice officials north and south to come up with more culturally appropriate services for Nunavik, Munick said.

“Sometime soon I’d like to sit down with all the key players that can help us make this happen for a better justice system,” she said. “Now’s the time to say: here’s the problem, so where are we going to go from here?”

“Otherwise we’re just going to keep on with these same conditions.”

Suggesting the KRG use their funding to “clean the cells,” as the ombudswoman said last week, misses the point, Munick said, about why the cells are getting so dirty in the first place.

Nunavik’s police facilities were built to accommodate the circuit court, and it’s no surprise they become crowded, she said.

“It’s not as easy as that,” she said. “But I know there will [be a call for] immediate action and pressure,” she said. “We’ll be working on this.”