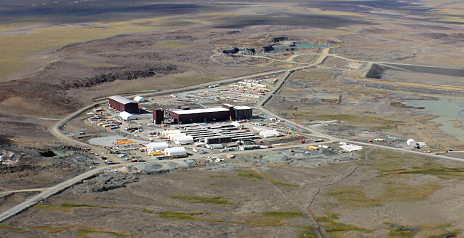 The Quebec government is prepared to loan $100 million through a government-linked investment agency to Canadian Royalties and its parent company Jien Canada Mining Ltd., which owns and operates the Nunavik Nickel mine.

The news comes just days after Quebec Premier Philippe Couillard re-launched the government’s Plan Nord, which promised to invest billions into building the province’s economy north of the 49th parallel.

But opposition parties in the National Assembly had questions April 14 about the government’s decision to invest in the Nunavik mine, given the premier’s background.

Couillard was named to Canadian Royalties’ board of directors in 2009, a year after he resigned as health minister under the Charest government.

Couillard also sat on the board alongside Dr. Arthur Porter, the disgraced former CEO of the McGill University Health Centre in Montreal, who faces fraud charges alleging his involvement with a multi-million dollar, kick-back scheme linked to the construction of a new hospital centre.

Opposition MNAs suggested Couillard’s connection to the mining company raises a conflict in the face of such a large government investment.

“As a former member of the company’s board of directors, did the premier have the prudence to withdraw from any cabinet discussion on the financing of Canadian Royalties?” Parti Québécois MNA Stéphane Bergeron said in an April 15 statement.

“Quebecers have a right to know whether the Premier took part in discussions or not,” he said.

For the past few years, the Nunavik Nickel mine — which lies near the Hudson Strait communities of Salluit and Kangiqsujuaq and is one of two operating mines in Nunavik — has struggled to get mine operations up and running.

Nunavik Nickel owed more than $70 million to its creditors in 2013.

The mine shipped its first load of cooper concentrate in November of that year, although since then, the mine’s operations have flown under the public’s radar.

Investissement Québec spokesperson Chantal Corbeil said April 14 that there would be a more formal announcement later this week.

Ressources Québec is considered an entry point for companies looking to invest in the mining and oil sectors, in and outside Quebec.