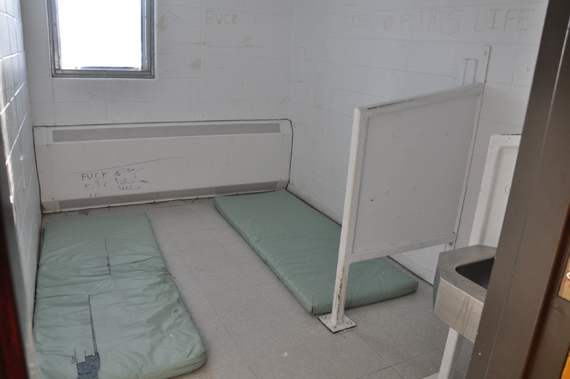 A view of a holding cell in the KRPF’s Kuujjuaq station. To deal with overcrowding, Quebec government has proposed to build new holding cells in Puvirnituq designated for use by court services. (FILE PHOTO)

KUUJJUAQ—Kativik Regional Government officials are reviewing a proposal from the Quebec government to build a new police station and detention area in the Nunavik community of Puvirnituq.

The proposal comes a year after the release of a scathing report by Quebec’s Protecteur du Citoyen (ombudsman) that flagged problems with detention conditions in the region.

The report, prepared by a delegation who visited holding cells in Akulivik, Kuujjuaq and Puvirnituq in 2015, found that detainees were held in dirty and overcrowded holding cells, with limited, and sometimes no, access to water, clean laundry and fresh air.

Among the worst of them, Puvirnituq’s police station, where one of six cells—designed to hold one or two detainees—might hold seven at times.

That’s because Puvirnituq serves as the judicial hub for detainees returning to the Hudson coast to appear in court from the southern correctional facilities where they’re held.

During recent meetings between Nunavik leadership and Quebec government officials, the province proposed to build a new police station in the Hudson coast community, along with separate holding cells designated for use by court services.

“What we’ve requested from the beginning is to have those two components separate,” said Frédéric Gagné, assistant director at the KRG.

“What we’ve seen is that we cannot mix regular detainees with those waiting court appearances.”

The report found cells would contain “incompatible” inmates, some of whom might be intoxicated; others suffering mental health issues.

Men and women inmates cannot be held in the same cells.

The Kativik Regional Police Force has noted that the number of cells corresponds with the amount of water a police station might have access to—in a region where water is trucked—along with food, bedding and washroom access.

KRG chair Jennifer Munick said the regional government is reviewing the proposal, although she anticipates that the province will respond to many more of the issues in the report.

“It’s not just Puvirnituq—it’s Salluit, it’s Inukjuak, it’s all the communities,” she said.

“We wanted to let them know that the justice system and policing in our region is slow and can be very unfair.”

Since the release of the report in April 2016, Quebec and the KRG have adopted an action plan to respond to its recommendations, including regular reports on detention facilities and more chartered flights between Abitibi and Nunavik so fewer detainees have to remain in cells.

But with no detention centre of its own and a travelling court circuit that puts a strain on local resources, the KRG is hopeful Quebec and eventually the federal government will deliver on more infrastructure for the region’s justice system.