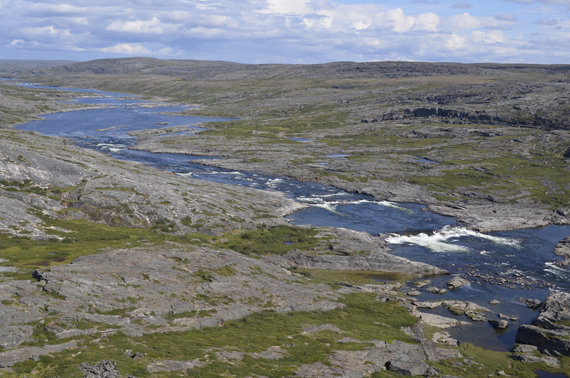 An aerial view of the Kovik River basin taken this summer during a KRG-led field study of the region. (PHOTO COURTESY OF THE KRG) 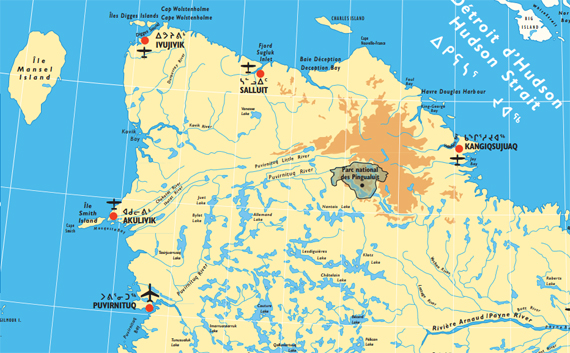 This map shows the Kovik River watershed, where the river flows into the Hudson Bay, between Ivujivik and Akulivik. (IMAGE COURTESY OF NUNAVIK TOURISM)

KUUJJUAQ — As a Nunavik working group continues working towards its goal of protecting at least 20 per cent of the region’s lands, it has one new victory to celebrate.

This past June, Quebec’s department of energy and natural resources agreed to temporarily suspend mining rights in part of the Kovik River basin, in the northwestern corner of Nunavik.

That means no exploration can happen within a 5,000 square kilometre area until the final boundaries are determined.

A department of energy and natural resources map shows there are currently no active mining claims in the area.

But the area has “a lot of mineral potential, and it was very hard to get (the department) to suspend those rights,” said Catherine Pinard, assistant director of lands and environment with the KRG’s department of renewable resources, environment, lands and parks.

“It was a pretty big achievement — it’s a significant area,” Pinard told the KRG council meetings in Kuujjuaq Sept. 9.

The river, which starts at Vanasse Lake roughly 40 kilometres south of Salluit, flows south and then west until it meets Hudson Bay, between the communities of Ivujivik and Akulivik.

The river’s watershed is an important wildlife habitat, Pinard said, while nearby communities harvest in the area.

The area is also rich in cultural history; Avataq Cultural Institute has plans to work in the area next year.

As early as 2008, the Quebec government pledged to set aside 12 per cent of its territory above the 49th parallel as parks, park reserves or protected areas by 2015.

The land protection process began in 2009 when the KRG, Makivik Corp., and Quebec’s environmental department started consultations with Nunavik communities on plans to protect 11 areas.

Since then, Nunavik has secured national parks, two national park reserves, 11 temporarily protected areas and made progress on three proposals from the region.

In addition to the proposal to protect the Kovik River basin, Nunavimmiut pushed to protect the Nastapoka River, which is now largely included within the boundaries of parc national Tursujuaq. Efforts to protect the Leaf River helped to have it included in a study area for a local park project.

A more recent commitment by Quebec aims to protect 20 per cent of the region by 2020.

“So we’re making progress,” Pinard said. “We’re beyond the 12 per cent target, although it’s not all permanent for now.”

If they secure permanent status, Nunavik’s protected areas will become parks, biodiversity or aquatic reserves, which all prohibit industrial development.

The working group’s next step is to complete environmental and social impact assessments on those 11 protected areas in order to achieve permanent protection.

But some KRG councillors feel disappointed in a process that didn’t appear to put Nunavik communities’ needs first.

In Aupaluk, Nunavik’s smallest community, councillor David Angutinguak said residents fear the impact of mining projects, like that of Oceanic Iron Ore Corp. which owns nearby deposits from the Roberts Lake area to the north and to Hopes Advance Bay in the south.

“We would have liked to have consulted with our community first, instead of the government coming to us after they had already designed the map,”Angutinguak said.

“We should have been the first ones to mark the land.”