“Northern development must rely on expertise” 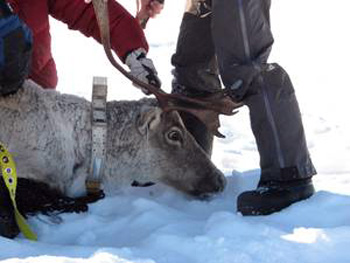 Laval university biologists put a collar on a captured caribou in Northern Quebec in February 2013. (PHOTO COURTESY OF CARIBOU UNGAVA)

Quebec’s Plan Nord wants to get a better handle on the province’s North, including its people and environment.

That’s why the Quebec government and some of the province’s most prominent universities are working towards the creation of a new research institution with a focus on northern development.

The new centre, which will go by the name Institut nordique du Québec, will involve researchers from Laval university, McGill University and Quebec’s national institute of scientific research.

The institute won’t have a main “storefront,” but is likely to maintain a presence in Montreal, Quebec City and Kuujjuaq.

“In the context of climate change and with a unique environment to protect, northern development must rely on expertise,” said Laval university rector Denis Brière in an Oct. 15 release.

“The institute will benefit from the contribution of valuable partners, including northern communities, which will add their traditional knowledge to scientific knowledge and technological know-how to sustainably develop northern Quebec.”

“By bringing together Quebec’s expertise in the area northern development in one place, the institute will become a major factor of attraction for the best talent on the scientific and technological level and a source of social innovation,” said McGill University’s Suzanne Fortier in the same release.

The new institution will be financed with $3 million over the next three years, money drawn from the Plan Nord fund and highlighted as part of the Quebec government’s 2014-15 budget.

That included the tabling of a new bill that will create the Société du Plan Nord, an agency designed to oversee development across Quebec’s North.

The Plan Nord was first launched in 2011 by Quebec’s Charest government, and then re-jigged by Pauline Marois’ Parti Québécois government in 2013.

“Our government has made the Plan Nord a pillar of its efforts to support economic recovery and that is why we will support the Institute nordique as a partner,” said Pierre Arcand, Quebec’s minister of energy and natural resources in a release.

“Our goal is to develop the full potential of the North, protect and live in a sustainable way and for that we need a strong background in social, economic and environmental areas.”

Quebec Premier Philippe Couillard is currently on a trade mission in China, where he is also promoting Quebec’s northern potential.