But education minister suggests a meeting with regional leaders first 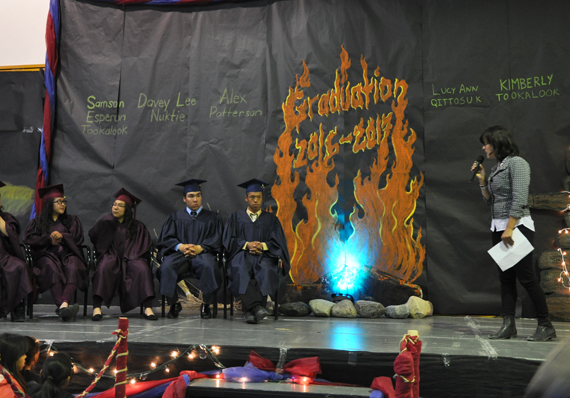 Umiujaq secondary students celebrate their graduation earlier this month in the Nunavik community. Quebec’s Education department has proposed sitting down with Makivik and school board officials to find the best approach to tackle issues in the region’s education system, including the provision of secondary diplomas, which haven’t been handed out in Nunavik since 2015. (PHOTO BY SARAH ROGERS)

Quebec’s education minister has invited Makivik Corp. to sit down and discuss how to address problems within Nunavik’s education system.

The invitation comes as a response to Makivik President Jobie Tukkiapik’s request to Quebec to launch an independent audit of the education system.

In a May 30 letter, Tukkiapik said an audit is needed to first understand and then resolve shortcomings in the delivery of Nunavik’s education, prompted by the recent admission that Kativik School Board high school graduates are not being issued standard diplomas.

“We share the same concerns about the persistence and academic success of Inuit students and the provision of quality educational services for Inuit students,” Quebec’s education minister Sébastien Proulx wrote in French, in a June 15 letter to Tukkiapik.

“I want to reassure you that the Department of Education [Ministère de l’Education] and the Kativik School Board are working collaboratively to resolve certain problems related in particular to the graduation of Inuit students.”

In response to Makivik’s request for an audit, Proulx goes on to say that his department is looking at “various scenarios.”

Proulx suggested that officials from Quebec’s education department and its secretariat of Aboriginal affairs sit down with Makivik and KSB officials to look at options.

“Our only concern, as I’m sure it’s one we share, is to ensure that the approach we take will not disrupt education services delivered to Inuit youth,” Proulx wrote.

Makivik has not yet said how it plans to respond.

For its part, the KSB said it has been pushing the education department to approve and accredit its Secondary 4 math and science curricula, so graduates can once again receive their standard diploma.

The school board said its expects to hear from the province by the end of the month.

In an email to Nunatsiaq News, the education department said it has almost finished its analysis of the curriculum materials and will respond to the KSB “as soon as possible.”