“We urge the government to be more rigorous and careful” 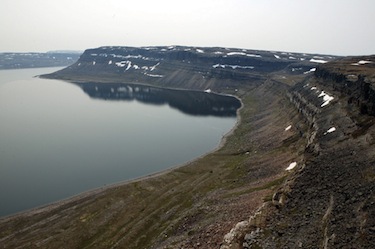 Quebec’s largest union, the CSN, wants the Quebec government to make sure the industrial development stemming from Plan Nord takes place in a sustainable way, to better protect areas like these cuestas near Umiujaq from the impacts of mining and hydro-electric development. (FILE PHOTO)

Quebec is moving ahead too quickly with its Plan Nord scheme to develop the northern portion of the province, says Quebec’s second largest union, the Confédération des syndicats nationaux.

The Quebec government’s claim that it will protect 50 per cent of the North from industrial development is misleading, the CSN said in a brief to the government’s “Protecting the North” consultation.

As part of Plan Nord, Quebec vowed to set aside 12 per cent of its territory above the 49th parallel as parks, park reserves or protected areas by 2015.

By 2020, Quebec plans to designate five per cent of the region as natural land reserves.

But that doesn’t guarantee industrial development will take place in a sustainable way, says the CSN, which represents 300,000 members in the private and public sectors.

“Even if the government is committed to protecting 50 per cent of the [northern] lands, what does this protection mean when the industrial activities in the other half are devastating and will affect the whole region? We urge the government to conduct a proper consultation on all aspects of Plan Nord,” said Pierre Patry, the CSN’s treasurer, in a Nov. 9 news release.

The union said Plan Nord needs to be based on sustainable development principles, to respect the rights of aboriginal and local communities, and protect the biodiversity and unique ecosystems found in northern Quebec.

“We should not be looking at how to protect a certain percentage of the land, but instead [we should] work on setting guidelines for an industrial development that will be environmentally-friendly,” Patry said. “We urge the government to be more rigorous and careful.

The Plan Nord is a major economic development project that includes equally large social and environmental impacts. Before going too far, the government should involve all groups concerned with sustainable development issues. Aboriginal communities, environmental groups, research centres, trade unions and companies must all be involved at every stage of implementation of the Plan Nord. The latter must be made responsible for the protection of ecosystems, biodiversity maintenance and remediation of the sites. This approach requires a culture change.”

Environmental groups in southern Quebec also stepped up their criticism of Quebec’s Plan Nord, when Premier Jean Charest travelled to Europe and Asia to tout his government’s development plan for Nunavik and other lands above the 49th parallel in Quebec.

The issue of which parts of Nunavik to protect and which ones to open up to development has become critical since last May’s launch of Plan Nord.

Quebec’s department of sustainable development, environment and parks will hold public hearings on the the creation of Ulittaniujalik park in Kuujjuaq, Kangiqsualujjuaq and Kawawachikamach, the three communities closest to the proposed park, from Nov. 21 to 25.

The park is supposed to protect lands in and around the George River plateau, about 120 kilometres south of Kangiqsualujjuaq, and shelter this region from some of the huge mining and mineral development projects expected to roll out of Plan Nord.