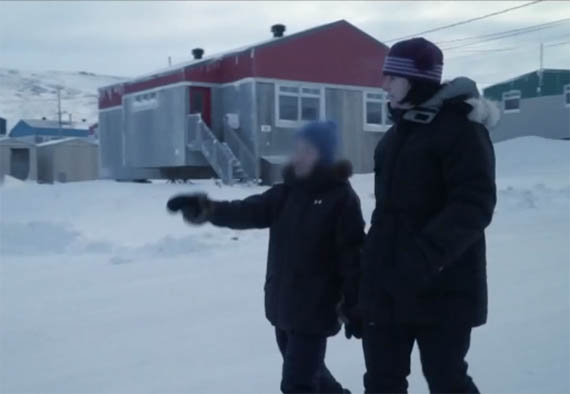 Radio-Canada journalist Josée Dupuis speaks to Kathy Papigatuk, who was raped by a construction worker in her home community of Salluit in 2013.

A Salluit woman has spoken out about her 2013 sexual assault, committed by a construction worker visiting the community.

While the majority of sexual assaults in Nunavik are committed by residents of the region, Inuit women say southern construction workers who come north to work on contracts can pose a threat.

The episode, called Uvangalu, or Me Too, focused on the story of Kathy Papigatuk, who was raped by a construction worker in Salluit.

In October 2013, a Gely Construction employee named Daniel Bilodeau invited Papigatuk, then 15, and her 16-year-old sister, to take a ride in his truck outside the Hudson Strait community.

Papigatuk said the 27-year-old man raped her in the back of his truck that night, and then told the girls not to tell anyone what happened.

“He wanted to be friends … but he turned out to be a monster,” Papigatuk told Radio-Canada journalist Josée Dupuis.

Papigatuk went to the local police station a few days later to give a statement. Bilodeau pleaded guilty to a reduced charge of sexual assault of a minor and received a 240-day sentence.

A number of women interviewed for the documentary said southern construction workers use their short stints away from home to prey on young Inuit women, plying them with alcohol and drugs.

More than four years after the assault, Papigatuk and her sister said they decided to speak out about it to try and help other women.

“It’s better to talk it out, to release the anger,” Papigatuk said.

You can watch the full French-language documentary online here.