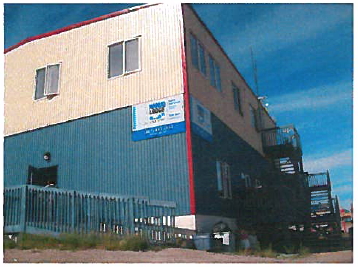 The 10-year-old Nanuq Lodge in Rankin Inlet has been deemed surplus by owner John Hickes. Rankin Inlet South MLA Alex Sammurtok thinks it could be retrofitted for a much-needed seniors facility.

Alex Sammurtok, MLA for Rankin Inlet South, is pushing for an elder’s care facility in his home community and he’s suggesting the Nanuq Lodge bed and breakfast might fit the bill nicely.

Sammurtok tabled documents in the Nunavut Legislature Oct. 25 showing a commercial appraisal that lodge owner John Hickes obtained for the building in July 2015.

In tabling the document, Sammurtok said that he has been “urging the government to consider all options for establishing an elder’s facility in the community of Rankin Inlet.

“I encourage the government to review these documents with care as I am sure they will agree that this building would be ideal to convert into an elder’s facility.”

The 10-year-old, 10,000-square-foot lodge, owned and run by Hickes and his partner Page Burt, is not currently for sale but Hickes, contacted in Rankin Inlet Oct. 28, said at age 73, he’s keen to cut back on his workload.

Hickes—born in an snow house before Rankin Inlet even existed back in 1944 and a three-time mayor of the hamlet—runs an outfitting business along with the Nanuq Lodge and the newer, 20-unit Executive Suites, built three years ago.

Hickes said there’s an obvious need for an elders centre in Rankin Inlet, so when Sammurtok approached him a while back asking if Hickes knew of any surplus buildings, Hickes said he did.

“We said you know, we’re trying to downsize and get easier in our lifestyle so we said yes, this is surplus. And when he said they’re looking for something for the elders, I am an elder, so I wanted to support the elders any way I could,” he said.

Hickes told Nunatsiaq News he could probably just sell the building—which, according to the appraisal is worth about $1.2 million—but selling it wouldn’t guarantee it would be used for the elders.

Hickes told Sammurtok that the Government of Nunavut could retrofit the lodge with the necessary safety and mobility features required for an elders centre and then lease it from him instead of buying it.

“Alex [Sammurtok] has been working on this quite extensively for some time. He was part of council so he knows what the community needs… but unfortunately, because of resources available to the territory, you can’t build a 50-unit facility. We just don’t have the capital currently,” Hickes said.

“But we have maintenance and repair budgets, I’m sure. And leases are quite easy to draft up.”

Hickes is uncle to George Hickes, Nunavut MLA for Iqaluit-Tasiluk and also Nunavut’s health minister, so the Nanuq Lodge owner is aware of a potential conflict of interest.

He said he’ll leave it up to Sammurtok to put forward the idea and then let the GN decide how to handle the issue free from conflict.

According to the appraisal, signed by Lauchlin R. MacDonald of Stewart, Weir, MacDonald Ltd. of Yellowknife, the Nanuq Lodge currently has an average occupancy rate of 75 per cent year over year.

“One of the negative things of a mining company coming into an area and bringing dollars and Rankin being centrally located in Nunavut is that we got too busy,” Hickes said.

“Everybody thought ‘we need to build to meet the demand,’ and what happened is that we over-built. We’re probably 60 or 70 beds over built for the needs of our community at this juncture.”

Built in 2004-2005, the two-storey Nanuq Lodge has, on the main floor, a registration desk, one guest room with bath and a roomy two-bedroom apartment and office occupied by Hickes and Burt.

Hickes said he is currently building a new house so he won’t need that apartment anymore.

The lodge’s upstairs currently has a breakfast room, meeting room, laundry room and eight guest rooms, each with their own bathroom.

The appraiser says in its current state, and with regular maintenance, Nanuq Lodge has a projected lifespan of another 55 years.