RCMP end search for Nunavut man presumed to be drowned 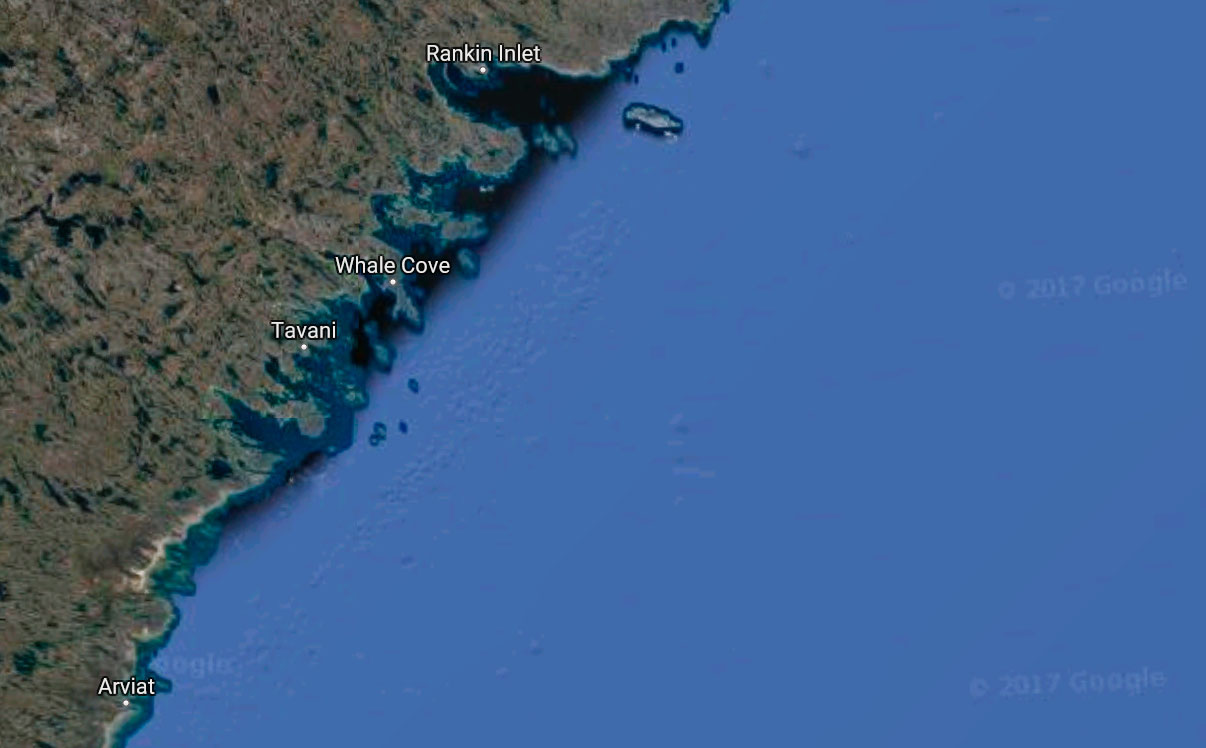 Four men were travelling along the sea ice of western Hudson Bay last weekend when their snow machine fell through the ice outside of Whale Cove. Only one man survived. (GOOGLE MAPS IMAGE)

Rescue crews have recovered the body of one Rankin Inlet man presumed to be drowned after a snow machine fell through sea ice Jan. 21 outside Whale Cove, RCMP said Jan. 25.

But the the team cannot find the body of another missing man and have called off their search.

Early Jan. 21, a group of four men travelling from Rankin Inlet to Arviat in a Bombardier snow machine went through the sea ice, killing three.

Corey, or “Kuuri” Panika, 27, survived and made it to Whale Cove, where he reported the incident to RCMP.

The body of Patrick Kaludjak, 55, was recovered Jan. 21, while two other men were presumed drowned: Billy Kaludjak, 33, and James Muckpah Kaludjak, 42.

An RCMP team and local search crew from Whale Cove and Rankin Inlet recovered the body of one of the two missing men Jan. 24, Nunavut RCMP said, but it’s not clear which one.

After being unable to find the remaining victim, police have called off the search for the time being.

The Office of Nunavut’s Chief Coroner has ruled the cause of the three deaths as drowning and the manner of their deaths accidental, the RCMP said.

“The Whale Cove RCMP would like to recognize and thank the local volunteers from Whale Cove and Rankin Inlet who assisted throughout this event,” the Nunavut RCMP said Jan. 25. “They spent countless hours and remained professional throughout the incident and recovery.”

“Our thoughts are with the Kaludjak family and friends during this difficult time.”

Across the Kivalliq region and the Nunavut territory, Nunavummiut have been mourning the three deceased men and friends and relatives throughout Nunavut have coordinated fundraising events to collect cash donations for the victims’ families.

From Iqaluit, Malaiya Netser has organized 50-50 draws to raise money for the families. The last draw she held earlier this week raised more than $2,000.

“I decided to do this because our family is close with the Kaludjaks,” Netser said.

“If my family had gone through a tragedy like they are going through now, I know in my heart they would do anything to help. Even if it was another family, they would jump right in and help.”

Nunavummiut can send a money transfer to Malaiya at mnetser@outlook.com if they want to contribute. Those in Iqaluit can connect with Netser or other fundraising volunteers Lily Maniapik, Regilee Adla, Michelin Kilabuk-Cote or Lucy Idlout in person to arrange a cash donation.

In a 50-50 draw, half the money raised goes to the winner and the other half will be given directly to the families, Netser said.

The draw will take place on the afternoon of Jan. 27, with the winner announced on the Iqaluit Public Service Announcements Facebook page.

In Rankin Inlet, April Wadland and her friend Ujaralaaq Karetak are collecting cash donations for the wives who lost their spouses Jan. 21.

Wadland and Karetak are collecting cash donations and will accept email money transfers that can be forwarded to wadland.april@gmail.com and ukaretak@gmail.com

The money will be divided equally among the families of the three victims.