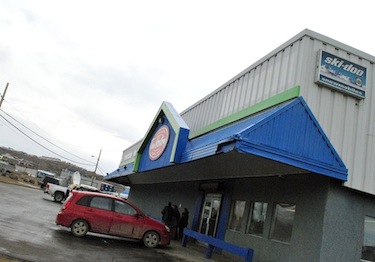 Shortly after 6 a.m. June 19, a small group of people outside the Northmart store in Iqaluit say they were attacked by two dogs. (PHOTO BY JIM BELL)

An Iqaluit man who works at the Northmart store in Iqaluit, is recovering from bites he received from a dog early on June 19.

At about 6:30 a.m., members of the Iqaluit RCMP were called to an area outside the Northmart where a small group of people said two dogs had attacked them.

A man in that group was bitten by one of the dogs, police said in a late-afternoon June 19 statement.

RCMP officers then drove around until they found the dogs, who were described by other sources as short-haired dogs.

One of the officers deployed his pepper spray on the dogs, the RCMP said.

Another RCMP member was attacked by one of the dogs and shot the animal.

Chief enforcement officer Kevin Sloboda told Nunatsiaq News that the body of dog that was shot had been sent south for analysis, to see if the animal carried rabies. The other dog remains in the city pound under surveillance.

All dogs in Iqaluit must be kept on a leash or chained in the city, he said.

But, although the June 19 incident was resolved, it’s unlikely to be the end of discussion about dog control in Iqaluit.

That’s because the two dogs involved in attack have been variously described at boxers or pitbulls.

In a nine-year review of fatal dog attacks in the United States, pit bills were implicated in 42 per cent of attacks in which breed was recorded.

Ontario and Winnipeg, Manitoba both have pit bull bans.

Iqaluit has no bylaw banning the ownership of pit bulls, a mix created by cross-breeding between bulldogs and terriers.

“We don’t have any breed-specific bylaws right now, but that’s not to say it hasn’t been brought up before,” Sloboda said.