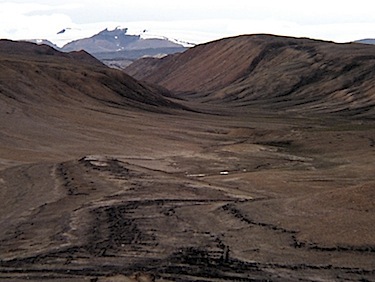 A view to the mountains and glaciers that characterize Axel Heiberg Island in Nunavut’s High Arctic. (FILE PHOTO) 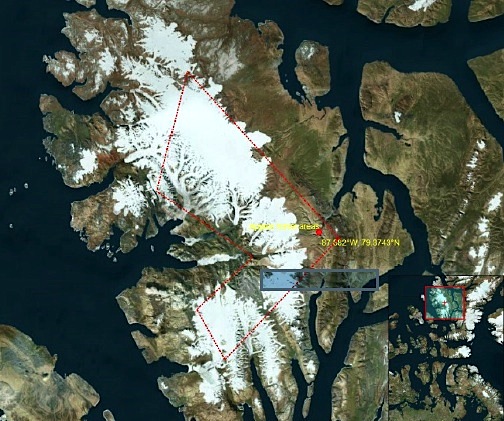 Here you can see an aerial map from the Nunavut Impact Review Board proposal of where Arctic Kingdom wants to set up operations for Red Bull’s proposed filming in July.

Among the many places on which you can land in Nunavut’s High Arctic islands, Axel Heiberg Island, just south of Ellesmere Island, stands out as being among the most remote and isolated.

The island’s closest neighbours: the listening station and research base at Eureka and the community of Grise Fiord, about 400 kilometres to the north.

But although it’s far removed from the world of caffeinated energy drinks, Axel Heiberg’s isolated glaciers and mountains appear to be a draw for Red Bull, the largest seller of energy drinks in the world.

The company, between now and Aug. 2, plans to film extreme sports activities such as mountain biking and do aerial photography of Axel Heiberg’s landscapes, after getting a thumbs-up on July 5 from the Nunavut Impact Review Board.

Red Bull, an energy drink sold by the Austrian company Red Bull GmbH, claims the highest market share of any energy drink in the world with more than five billion cans sold in 2013.

As part of its sales pitch, Red Bull uses content to market the product to potential consumers, and it avoids even mentioning the term “energy drink.”

Instead, Red Bull has its own network, Red Bull TV, as an online video-on-demand platform to sell its product and extreme lifestyle brand.

According to information from its website, Red Bull TV also serves as a global platform for non-fiction productions from the Red Bull Media House and its partners, through scheduled programming and video on demand, including daily uploads of clips, action features and web series.

So it’s easy to see where some extreme footage from Axel Heiberg would find a home.

The film production plan for Axel Heiberg isn’t part of the project proposal information filed with the NIRB, but some activities are revealed in its project description, which talks about the base camp that the film crew wants to set up on Axel Heiberg.

The camp, run by the Arctic Kingdom tour company, and located inside or close to Inuit-owned lands, will be the base of operations, providing staff and clients with lodging and food.

For supplies, the group plans to charter a Twin Otter, which will make weekly trips and require an off-strip landing place by the camp.

All-terrain vehicles will bring people and equipment to multiple locations on the land for filming, the project description says, while drones and a helicopter will provide aerial filming of mountain biking on the land.

And the project will be conducted with co-operation and support from the nearest communities of Grise Fiord and Resolute Bay: they plan to hire guides, bear monitors, and other personnel as needed.

The NIRB approved the project July 5, but that approval came with 35 project specific terms and conditions including that Arctic Kingdom outfitters mitigate impacts on wildlife, such as caribou, preserve the integrity of the local environment and refrain from hunting or fishing unless they acquired approval.

The NIRB also said the project shouldn’t interfere with Inuit harvesting activities and traditional land uses and that the company must “consult with local residents regarding their activities in the area and solicit available Inuit Qaujimajatuqangit and information that can inform project activities.”

Those terms and conditions were in response to a number of submissions made to the NIRB including comments from the Grise Fiord Iviq hunters and trappers association.

The HTA raised concerns about potential impacts on Peary caribou and also said that Arctic Kingdom left garbage and propane on the ice last time it was in the area.

“They will need to bring back their garbage to keep our land clean,” the HTA said in its comment to the NIRB.

To that, Arctic Kingdom responded with detailed plans on how it will take out trash or otherwise deal with waste issues.

The Government of Nunavut also noted concerns about the disturbance of archeological sites.

A search of the Nunavut Archaeological Site Database showed no recorded archaeological sites near the camp location, the GN said in its comment to the NIRB. But this doesn’t mean that there aren’t unrecorded sites or cultural features.

A cluster of archaeological sites showed up 25 kilometres east of the camp site, the GN said—and no activities should be conducted in the vicinity of any archaeological or historical sites.

The GN said “it is the responsibility of the expedition leader to steer people away from any encountered archaeological site or feature. If sites are encountered they should be recorded (GPS + photographs) and reported to the Government of Nunavut Territorial Archaeology Office.”

Although not mentioned in the project proposal to the NIRB, Axel Heiberg is home to an ancient fossil forest. That’s where the GN is still looking at establishing a territorial park, Napaaqtulik, “where there are trees,” a name inspired by the forest of towering trees which once thrived on Axel Heiberg 50 million years ago, and then died back and were buried under the sandy soil of the Geodetic Hills.

Axel Heiberg is also rich in fossils, such as those of ancient turtles and alligators from 90 million years ago and even older duck-billed dinosaurs.