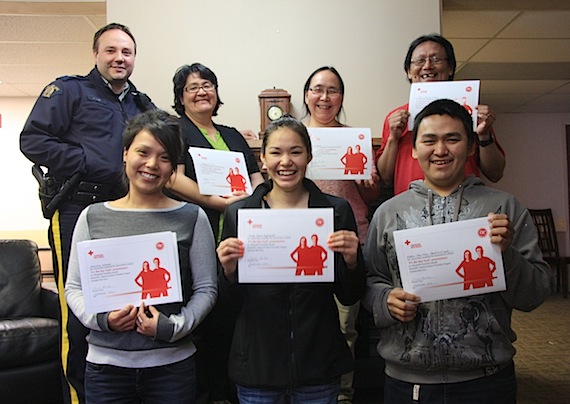 This group of school and community counsellors, and youth mentors in Baker Lake, including RCMP Cpl. Jonathan Saxby, were all smiles Sept. 13 after completing their training as RespectEd educators, provided by the Canadian Red Cross. The group will deliver abuse-prevention awareness to youth of the community. (PHOTO COURTESY OF SARAH BURKE)

Red Cross trainers Sarah Burke and Rebecca Ulrich helped create “prevention teams” in each of the communities, comprised of community social workers, counsellors, mentors, and justice workers, who are now ready to give workshops to reduce violence among youth and adults.

Clyde River was the final stop, Sept. 23 to Sept. 27, in a series of week-long sessions in each of the communities.

The sessions are part of the Nunavut Suicide Prevention Strategy Action Plan, spearheaded by the Embrace Life Council, an Iqaluit-based suicide prevention group.

“The goals of the territorial suicide prevention strategy state that the root causes of violence need to be addressed, and this is what the Red Cross program does,” says Burke. “We operate from a sustainable model that builds on community ownership.”

RespectEd extends to all members of the community, from children to adults.

“It’s for anyone who has a vested interest in a safer community.”

Burke, who is director for RespectEd in Western Canada and the North, and Ulrich, the manager of RespectEd for Manitoba, started their series of training sessions in Baker Lake on Embrace Life Day, Sept.10 — otherwise known as World Suicide Prevention Day.

Seven Baker Lake residents, including school and community counsellors, youth mentors, and an RCMP officer, were trained to deliver child sexual abuse prevention awareness to schoolchildren, and awareness on healthy relationships to adolescents.

She has seen the program bring great benefit to Nunavummiut convicts and victims of violence in Iqaluit earlier this year, where the Red Cross gave two weeks of training and workshops as part of a pilot program.

A major part of the solution toward ending the cycle of violence is to simply express or “name” what is bothering you, Burke said.

“If they don’t know how to name what has happened and how the impacts have affected them, they’re unable to reach out for help,” she says. “We actually did these workshops with the men from the BCC (Baffin Correctional Centre), the young offenders, the women’s jail, and the women’s shelter, just to see if we can interrupt the cycle.”

“They were surprised that they had never known that what they suffered as a child was playing out in their patterns today.”

The Red Cross program focuses on education, as a first step.

“I think there is a particular sense of urgency almost, in Nunavut,” Burke said, reflecting on RespectEd training she has given in other parts of the country.

“What feels really good in Nunavut is coming forward with a prevention team that lives in the community,” she said. “It’s not comprised of just southern service providers, but Inuit people.”

Her most recent training sessions in Clyde River were given almost completely in Inuktitut to members of a cultural team.

The Embrace Life Council hopes the Red Cross program will create a solid foundation for a territory-wide effort to create safer communities.

“This is all part of the Nunavut Suicide Prevention Strategy Action Plan and our commitment within that to provide ongoing training to youth, frontline workers, and the community.” 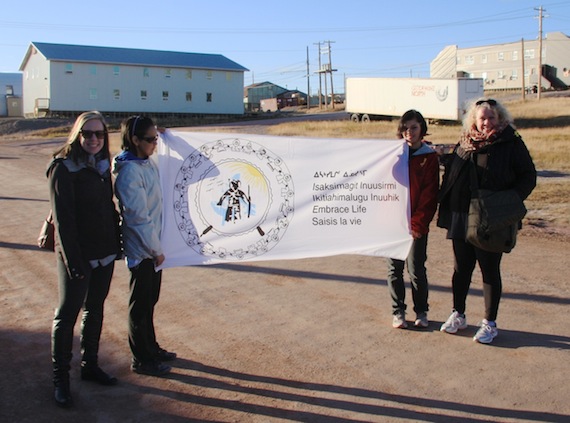 Sarah Burke, far right, and Rebecca Ulrich, far left, of the Canadian Red Cross celebrate Embrace Life Day with members of the Baker Lake Against Suicide Team in Baker Lake, Sept. 10. Burke and Ulrich were in the community to give a week-long training session to community counsellors and mentors as part of the Red Cross’s RespectEd anti-violence program. (PHOTO COURTESY OF SARAH BURKE)