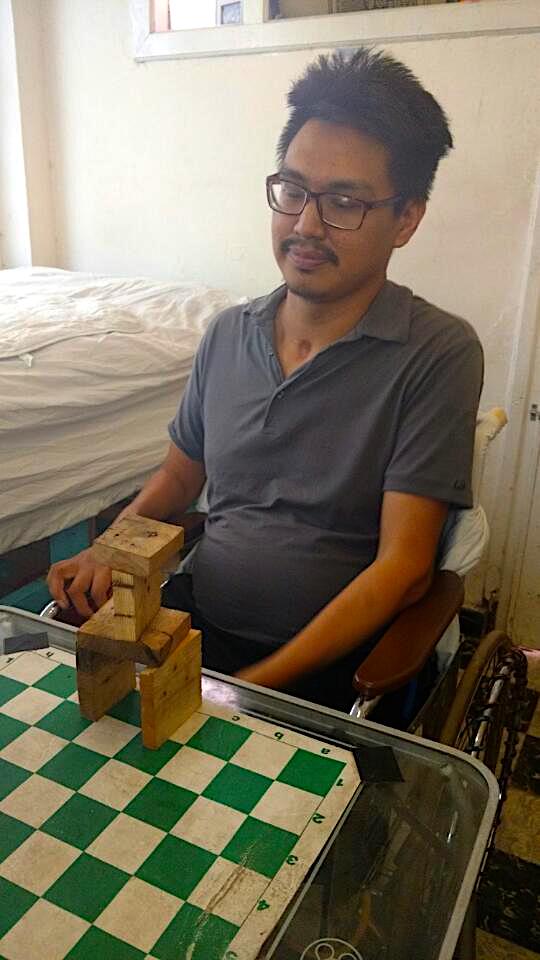 Napu Boychuk eyes the tower he was recently able to build, by himself, with wooden blocks, a huge achievement because, until recently, he had no use of his arms. (PHOTO COURTESY OF T. BOYCHUK)

In Havana, together, Dan Boychuk, Tuutalik Boychuk and Napu Boychuk, who has been in Cuba since late 2015 when he broken his back in a swimming mishap in Varadero. (PHOTO COURTESY OF T. BOYCHUK) 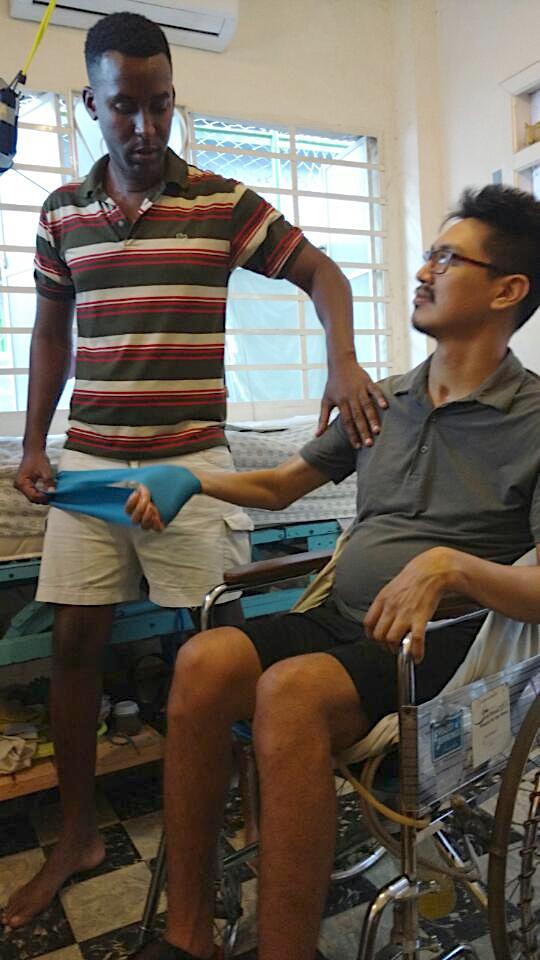 A physical therapist helps Napu Boychuk with an exercise designed to stretch and stimulate his muscles. (PHOTO COURTESY OF T. BOYCHUK)

A December 2015 holiday trip turned into a nightmare for Dan Boychuk and his two adult Inuit children after his son, Napu, broke his neck in a swimming mishap on the beautiful beach of Varadero.

More than two years later, Dan and Napu, who is fighting paralysis from the neck down, are still in Cuba, while, back home in Ontario, Tuutalik, Napu’s older sister, constantly frets about how they can continue paying for Napu’s round-the-clock care in Havana.

That care costs more than $3,000 a month—and roughly a third of that goes to paying off a hospital bill of about US$60,000 in Havana for care Napu received at the Cira Garcia hospital after the accident.

The family is broke, said Tuutalik, mainly because they’re paying $600 a month to the hospital, and they’re still tangled up in the red tape, which has so far prevented Napu, who had two insurance policies, from getting his hospitalization costs fully covered.

“The $600 to Cira Garcia is killing us. Without this I believe we could get by without the extreme stress that I am incurring,” Dan told Tuutalik in a recent email.

The insurance companies finally determined they would not cover the hospital bill because Tuutalik and Dan decided not to repatriate Napu back to Canada Jan. 7, 2016.

Complicating the situtation: Napu had two insurance policies, one under Ryerson University in Toronto, where he was a student, and another one, a short-term travel policy with another insurer purchased for the trip to Cuba. That insurer was the one that Dan first contacted after Napu’s accident, so it took over the file.

After months of back-and-forth discussions, neither of the two insurers would agree to cover the US$57,653.35 owed to Cira Garcia hospital because they maintain that Napu could have, and should have, been brought back to Canada by early January 2016.

But Tuutalik said she doesn’t regret the decision to keep Napu in Cuba, for medical reasons on the advice of doctors.

“He was on a ventilator because he could not breathe for himself. He was unconscious. He was paralyzed from the neck down,” she said.

That made them nervous about putting Napu on a plane in his condition.

“As the days, weeks and months went by, more and more reasons came up to make us happy we made that decision: Napu’s care that he kept on getting. Napu’s recovery. Napu’s psychological well-being, because of the care he was getting and the fact that we could spend so much time with him every day,” she said.

But the lack of insurance coverage for his hospital stay left them with that enormous hospital bill to pay when Napu finally left for a rental apartment in Havana that May.

Since then, he’s been living there with Dan and undergoing intensive therapy designed to overcome the damage to his nervous system. Therapies include muscle building, hand therapy, laser treatment, electric current, massage therapy, leg and torso therapy.

And there are positive results: grasping a ball and building a tower of wooden blocks are the recent milestones of progress for 30-year-old Napu, who, at the time of the accident, was close to earning a bachelor of fine arts degree in dance performance at Ryerson University, with the goal of becoming a ballet dancer.

Napu’s achievements with his arms are “great and wonderful,” said Tuutalik in a recent telephone call from Kingston, Ont. where she works in corrections.

But she said she spends much of her off-work time worrying about her brother and father, trying to make some progress with Napu’s case and raising money for his care.

If Napu is not back in Canada by July 2018, he also stands to lose his Ontario Health Insurance Program health coverage, she said.

But Dan and Tutalik say Napu would have to be institutionalized in Canada, as they could never take care of him at home with the little that OHIP offers in assistance.

So far, to help them stay in Cuba, an online fundraising site has received $32,000 in donations, from well-known Canadians such as writer Margaret Atwood and others who are touched by his story.

“As a fellow dancer, your story made me cry. Donating to your recovery is the least I can do. I hope to see you on the stage someday ♥,” said one donor.

Last year, Iqaluit’s Jerry Cans were in Cuba to perform at the Havana Book Fair. They invited the Boychuks to their Havana concert, but Napu couldn’t come, so the Jerry Cans visited Napu and performed a private concert for him.

They later gave a month’s proceeds from the sale of their album Inuusiq to help Napu.

Tuutalik said would like to see Napu stay in Cuba because of the quality of care her brother receives in Havana, his daily physiotherapy and round-the-clock home care, which would be impossible to replicate in Canada.

But it’s not clear if they can remain because money is short and running Napu’s home care program on a shoestring is tough on Dan, who does not speak Spanish and has limited support from friends back home due to the poor internet in Cuba.

In her efforts over the past two years to get help for Napu, Tuutalik also learned that the federal government would not step up to assist Napu, as an Inuk in distress, although he does receive some money every month due to his disability.

However, Napu is not eligible for money from Health Canada’s Non-Insured Health Benefits Program, which provides Inuit with coverage for many medically necessary health benefits, because the NIHB program does not provide coverage for any health care obtained outside Canada.

Canadian coverage for out-of-country medical care is usually limited to emergency health services that are received because of a sudden illness or accident, and generally does not include rehabilitative services, the Strategic Policy Branch of the First Nations and Inuit Branch told Tuutalik, who continues to look at other ways her brother can stay in Cuba.

Her most recent effort includes the distribution of a poster seeking support for Napu, “the world’s first Inuk (“Eskimo”) Professional Ballet Dancer from Toronto, Canada.

“He achieved this in spite of the National Ballet School telling him to do ‘Aboriginal’ stuff instead. In 2015, he suffered a spinal cord injury in the ocean. In spite of everything, he still aspires to be a choreographer. If you want to help him, please share his story,” the poster says.