Out of service since late 2011, research vessel heads north from Quebec City 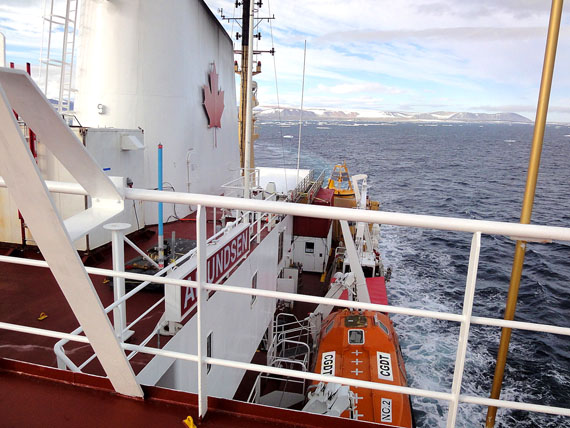 The Canadian Coast Guard icebreaker Amundsen headed back to work in the Arctic from Quebec City July 26 after extensive repairs and upgrades. The ship serves as a scientific research vessel in summer and fall months, and as an icebreaker-escort ship on the St. Lawrence River and the Gulf of St. Lawrence during the winter. (PHOTO BY JANE GEORGE)

The Canadian Coast Guard research icebreaker Amundsen set out from Quebec City for the Arctic July 26, on its 10th anniversary mission as a science vessel.

The ship leaves Quebec on its first Arctic mission following major repairs, including replacement of its engines and upgrades to shipboard systems and equipment, the Department of Fisheries and Oceans said.

This marks the 10th year for the Amundsen’s dual service as a science vessel in the North during the summer and fall seasons, and as an icebreaker and escort ship in the St. Lawrence River and the Gulf of St. Lawrence during the winter months.

Built in 1979, when it was called the CCGS Sir John Franklin, the Department of Fisheries and Oceans transformed the ship into a research vessel in 2002-2003.

Since then, the ship’s mission in summer and fall has centred on scientific research in the Arctic. This work is a collaboration between the Coast Guard and ArcticNet, a network of 30 Canadian universities and research centres based at Université Laval in Quebec City.

“It’s a partnership that’s worked out very well,” Katie Blasco, communications officer for ArcticNet, said from Quebec City on the day of the ship’s departure.

Families of coast guard crew and scientists were expected to see the ship off in the afternoon.

“I think everybody’s excited that the ship leaves today on its 10th anniversary mission, especially since it’s been in dry dock for the last year.”

A crew of 40 Coast Guard members and 41 scientists with ArcticNet will work on the ship throughout its 82-day mission this summer and fall, Blasco said, with crew and staff rotations to take place throughout the three months.

The Amundsen will travel along the coasts of Labrador and Baffin Island, north to Baffin Bay, through the Northwest Passage to the Beaufort Sea in the Western Arctic and back again, according to ArcticNet, and return to Quebec City in mid-October.

The ship will first reach the community of Pangnirtung on Aug. 3, then conduct sea ice research in the north of Baffin Bay, Blasco said, before heading to the Western Arctic.

Scientists will carry out three weeks of research in the Beaufort Sea as part of a federal government program known as the Beaufort Regional Environmental Assessment, she said.

This will include oceanographic sampling, seabed assessments, and acoustic mapping of fish with sonar equipment.

The Amundsen’s “facilities and pool of over $30 million in scientific equipment make it a versatile research platform for polar research,” ArcticNet stated in a July 23 news release.

The multi-purpose science vessel has also served as a floating research clinic for a big Inuit health survey conducted during the 2007-08 International Polar Year.